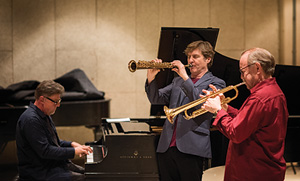 Jazz students and members of the One O'Clock Lab Band got a lesson in November from a master -- saxophonist Tim Ries ('81), who has played for the Rolling Stones, Maynard Ferguson and Stevie Wonder.

Ries, based in New York, also has released nine CDs as part of the Tim Ries Quintet.

"Throughout his interaction with students,Tim referred often to his years at North Texas and how they helped prepare him for the challenges of being a working musician in New York City," says Mike Steinel ('81 M.M.Ed.), associate professor of jazz studies. "His story is inspiring to our students."