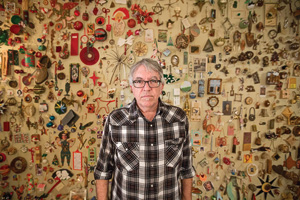 When Steve Wiman ('81) was an art student, he walked all over Denton collecting bits of faded plastic, rusty metal scraps and natural specimens that he used for temporary installations mounted in the halls of the Art Building.

Now he's made a career out of such found objects -- using them both as an artist and as the owner of Uncommon Objects, an antiques store in Austin. His home has even been featured on the Weird Homes Tour in Austin.

"Finding value in the discarded and seeing beauty in the worn and decayed have informed both my art making and my antique business," Wiman says.

He notes that North Texas' art program was vital and challenging, with faculty members Henry Whiddon, Vernon Fisher, Judy Youngblood and Teel Sale helping him to develop his focus. He also met his wife, Emily Cowart ('82), in a drawing class.

Wiman's artwork can incorporate such objects as poker chips on a wire grid, pantyhose on a metal grid and a series of paint brushes lined up on a shelf to look like a forest.

He opened Uncommon Objects in 1991, a few years after receiving his Master of Fine Arts degree at the University of Texas at Austin in 1986.

"The challenges of owning a small business are, for me, balanced by the pleasure of doing what I love," he says. "I get to drive around the state treasure hunting, stopping at every flea market, estate sale and antique mall I spy. I spend creative energies at the shop, building interesting displays and vignettes with the objects I acquire. I enjoy the quirky bunch of people that inhabit the Uncommon Objects universe, including my staff, the group of vendors who sell there and the remarkable group of folks who are our customers. I love my work!"