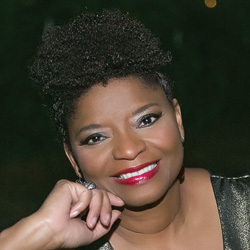 When doctoral student Sanderia Faye read Harper Lee's novel To Kill A Mockingbird, she asked herself, "What if Scout Finch was African American?" That led her to write The Mourner's Bench, the story of a woman who gets caught up in the 1960s civil rights movement, as told by her 8-year-old daughter. The novel won the Zora Neale Hurston/Richard Wright Foundation Legacy Award for Debut Fiction this fall.

"As I researched the civil rights movement in the Arkansas Delta, I realized that there was more to the history than the information I had received," she says. "Women did lead in some cities. Children played an important role, and not every African American protested."

After graduating in 2017 with her Ph.D. in English, Faye hopes to teach creative writing. She's also working on two books.

"This award validates all of the work, the doubt, the criticism, the days sitting in classrooms with all white students and professors," she says. "And the times I wondered if it would ever happen for a black woman from a small town in rural Arkansas trying to tell the truth about our history."