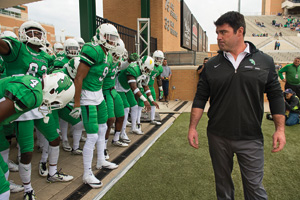 The resurrection of the Mean Green football team engineered by new head coach Seth Littrell has made for a stunning season. After just one win a year ago, the Mean Green finished the regular season with a 5-7 record, which is the second-best turnaround in college football this year.

And due to an NCAA Academic Progress Rate that ranks in the top 10 nationally, the football team will play at the Zaxby's Heart of Dallas Bowl on Dec. 27. Littrell is the second first-year head coach in the history of the university to ever lead the team to a postseason bowl game.

And this year Littrell and his staff, who arrived in Denton a year ago deep into the recruiting season, will have the chance to assemble their first full class of recruits.

"We've had an incredible season with an opportunity to accomplish our mission of winning our bowl game," Littrell says. "We're on track for more success ahead."

More than a homecoming 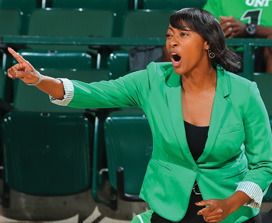 Jalie Mitchell ('02), hired as the Mean Green women's basketball coach in 2015, is one of UNT's greatest players. A member of the UNT Athletic Hall of Fame, she remains the all-time leading scorer in Mean Green women's basketball history. And her coaching efforts are creating big impacts for the Mean Green. Her team posted 11 victories a year ago, more than doubling the total from the previous season, and earned the program's first win over a ranked opponent.

This year's squad combines Mitchell's first full recruiting class -- which includes transfers from Power-Five programs and a talented group of freshmen -- with the team's returning veterans. Fellow Conference USA coaches picked the Mean Green to finish seven places higher in 2016-17 than it did last season.

"The sky is the limit for our team," Mitchell says. "And obviously there are people who share the same sentiment."

The 2016 UNT Athletic Hall of Fame class was announced at Homecoming.

The six-person class includes NFL pro football players Lance Dunbar and Craig Robertson ('10, '14 M.S.). Dunbar, the all-time leading rusher in UNT's history, is a running back with the Dallas Cowboys, and Robertson, the No. 2 all-time tackler at UNT, is a linebacker with the New Orleans Saints.

The class also boasts Susan Waters ('07), one of the best hitters in Mean Green softball history; Calvin Watson ('07), one of the stars of the Mean Green men's basketball run to the 2007 Sun Belt championship and a berth in the NCAA tournament; Andrew Smith, the quarterback who led UNT to a New Orleans Bowl victory in 2002; and Ron Miller ('68), former point guard on the men's basketball team from 1965 to 1967.

Mean Green soccer coach John Hedlund opened the 2016 season with the 300th victory of his career, then capped the year with his program's third consecutive regular-season championship and 12th conference title.

In his 23 seasons as coach of the Mean Green women's soccer team, Hedlund's teams have never had a losing record.

This year, UNT set a school record with its 17th-straight win at home and extended its unbeaten streak at home against league foes to 39 games, which is tied for the longest such streak in the nation.

Junior forward Jeremy Combs is on pace to become the 22nd member of the Mean Green men's basketball team's 1,000-point club. Combs entered the 2016-17 season with 771 points. He scored 461 points last season, and another such performance would vault him not only into the 1,000-point club for his career but into the top 15 among the Mean Green's all-time leading scorers.

Season and single-game tickets for the 2016-17 Mean Green men's and women's basketball seasons are on sale now.