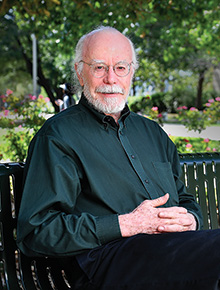 David Mason doesn't claim to be an economist or a Wall Street expert, but he's found an investment with a 6,000 percent return — peace studies.

Mason, a UNT Regents Professor of political science, says that's largely because peace scientists have learned how to write peace agreements that "bring conflicts to earlier and less destructive conclusions."

"The World Bank estimates that civil wars cause on average $60 billion worth of destruction," says Mason, winner of the UNT Foundation's 2016 Eminent Faculty Award, presented annually to faculty for outstanding and sustained contributions to scholarly-creative activity, teaching and service. "On the other hand, a peace keeping force costs about $1 billion. So a $1 billion investment in peace reduces by 50 to 70 percent the odds of a nation experiencing another $60 billion worth of destruction."

"After the Cold War ended and those two countries stopped funding those conflicts," he says, "the two sides didn't have any interest in continuing to fight."

Mason joined the UNT faculty in 2002 and was heavily involved with bringing the Castleberry Peace Institute to UNT in 2010. The institute sponsors cutting-edge research and educational programs on the causes of war and peace.

Watch a video about Mason.