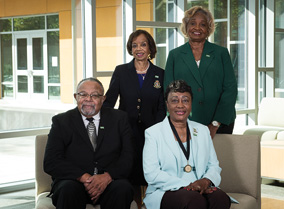 Honorees included, from left, Leon King ('62, '72 M.Ed.), with four decades of service in the Dallas ISD; Pat Means Mays ('63), who worked in the district for 23 years; Mary Margaret Smith Bradley ('61, '67 M.Ed.), who retired after 49 years; and Marilyn Gibson Calhoun ('68, '73 M.Ed.), who had a 32-year career there. This year's ceremony was dedicated to the memory of Joe Louis Atkins ('66 M.Ed.), the prospective freshman whose lawsuit opened UNT to all African American students.

King was in the first class of African American freshmen in fall 1956 and became one of the first African American athletes at North Texas and in the state when he joined the football team. He earned a doctorate from Nova University and was a coach and science teacher before serving as assistant principal and principal at five Dallas ISD campuses. He still works as an interim principal for the district.

Bradley, who arrived on campus in fall 1957, was the first African American to earn a bachelor's in health, physical education and recreation from North Texas. She taught math, science and P.E.; wrote curriculum; and was an advisor and evaluator of interns in the district's alternative certification program.

Mays came to campus in 1960, graduating in three years. She was a teacher and principal before becoming owner of Pat Mays Realtors in Dallas and has served as president of the Metrotex Association of Realtors.

Calhoun transferred to North Texas in 1964 to finish her degree, then served as a science teacher, curriculum writer, instructional facilitator and principal. She also has worked with the Texas Education Agency and the Learning Exposures Foundation in Dallas.

“I was able to pass along to my children that even though there are different races, we can work together -- that once you know the history of a person, what they’ve gone through, you can understand that person better,” she says.

King says his experiences as a student aided him in overcoming obstacles he faced later in life.

"It was at North Texas," he says, "that I realized the importance of an education."