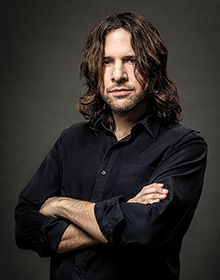 Pianist and composer Henry Hey ('92) has worked with artists such as Rod Stewart and played on the soundtracks for Oceans Thirteen and other movies.

His latest project allowed him to work with one of music's biggest legends, the late David Bowie, and fellow UNT alumni.

Hey served as the arranger, orchestrator and musical director for Lazarus, a play co-written by and featuring the music of Bowie. The play ran off-Broadway in New York last winter and is currently running in London. Hey was featured in articles in The New Yorker and Rolling Stone.

This project proved to be unique because of Bowie.

"He was an incredibly humble and generous individual," Hey says. "He was so interested in creating art and was truly selflessly excited about what others would bring to the table."

When he needed a drummer, Hey instantly thought of Brian Delaney ('92), whom he met at UNT and moved with to New York City after graduation.

"Brian was the first player I presented to David as I knew that we had to have him if at all possible," he says. "He has amazing authority and authenticity in playing this music, yet has such a wide musical scope."

Hey also brought in guitarist Chris McQueen ('06), a member of Snarky Puppy. Hey and McQueen also are in the band Forq with Snarky Puppy bassist Michael League, who attended UNT from 2002 to 2006.

Bowie vetted and approved Delaney and McQueen. Hey always knew from his time at UNT that he had a number of talented and adventurous classmates.

"I was very lucky to be playing and studying amongst some great musicians," Hey says, "many of whom have gone on to do pretty big things in the music world."