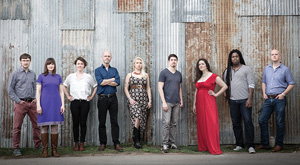 The eight-member ensemble won a Grammy Award for Best Chamber Music/Small Ensemble Performance in 2014 for its debut album, Roomful of Teeth. Member Caroline Shaw won the Pulitzer Prize for Music in 2013 for her composition, Partita for 8 Voices, that was included on that album. The group released its second album, the Grammy-nominated Render, in 2015.

Roomful of Teeth visited campus in October and will again work with students from the College of Music's choral, composition and vocal areas in March. The ensemble will perform at 8 p.m. March 9 at the Murchison Performing Arts Center.

Members include alumni Thann Scoggin ('04, '07 M.S.) and Cameron Beauchamp, who is excited about making new relationships with UNT students and faculty.

"With such an incredibly vast and diverse music school, we have endless possibilities of collaboration," Beauchamp says.