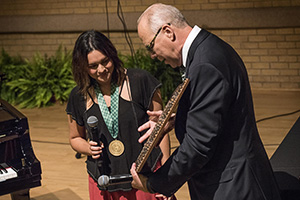 When UNT alumna and Grammy Award-winning musician Norah Jones visited campus Sept. 21, she received one of UNT's most prestigious awards and gave jazz students an education on the music industry.

President Neal Smatresk presented Jones with the Presidential Medal of Honor -- the highest medal given by the university. She was in Denton to perform as part of the Oaktopia music festival, of which UNT was the premier sponsor.

"What's up, y'all?" Jones greeted the students packed into the Music Building's Recital Hall. "It (the building) looks the same."

Before the award presentation, Jones answered questions from John W. Richmond, dean of the College of Music, and took questions from students ranging from how to stay healthy on the road to her creative process. 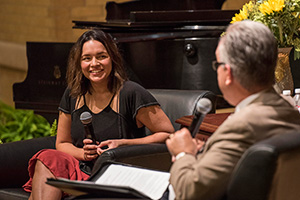 Jones was a jazz studies student in UNT's College of Music from 1997 to 1999. Her 2002 debut CD, Come Away With Me, won six Grammys, the most prestigious award in the recording industry. Jones has won a total of nine Grammys and sold more than 50 million records. Her newest and sixth solo album, Day Breaks, will release Oct. 7.

But the music business has changed greatly since Jones first broke into the business, with the rise of streaming. Jones noted that success came early to her, and aspiring musicians will face a greatly different world. For example, Richmond noted that, in order to make money, musicians have to be able to "fill up stadia."

"Is that the plural of stadium?" Jones asked. "Oh my god, I didn't know that."

When Richmond told her that UNT has a new entrepreneurial program, she said, "That's a good idea! It's a tough world out there now for musicians."

Jones explained to students that self-promotion was important for successful musicians, but if they are uncomfortable with self-promotion, they can ask a friend or family member to help out.

"You should always play live when you can," she says. "It's like paid practice. There's no replacement for that."

Jones described her two years at UNT as summer camp because she took mostly music courses instead of academics. She was part of the Jazz Singers and the Zebras, a jazz piano group.

"I had a great experience," she says.

Another student asked Jones how she keeps the magic in the studio. She noted "Don't Know Why"-- a song from Come Away With Me that won Best Female Pop Vocal Performance and Song and Record of the Year Grammy awards -- was recorded on its first take.

During the award presentation, Smatresk told Jones that the audience was enchanted by her genuineness and candor. He then placed the UNT Presidential Medal of Honor, complete with UNT's tartan ribbon, around her neck.

"Norah Jones is a celebrated artist who has had such a wonderful impact on the music world, and she has made her alma mater proud," President Smatresk said. "Her journey from music student to award-winning artist and musical icon inspires our students to work hard to fulfill their dreams."

The Medal of Honor is given by the president to acknowledge those who have elevated the university and made significant contributions to the world. Only one other alumnus -- sports broadcaster George Dunham ('88) -- has received the award.

"And I learned what 'stadia' is," she quipped.

Freshman marketing and music minor Bobby Gotsch was able to ask Jones about her process for creating music.

"It was incredible to engage with somebody who so many people look up to," Gotsch says, adding that he's proud to be part of a college with alumni such as Jones. "It makes me feel like I'm carrying on a legacy with a strong history."

An audience member in the enthusiastic crowd yelled "UNT!"

Jones, who performed "You Don't Know How It Feels" and "Time to Move On," yelled back, "Yes! UNT!" and put her thumbs up.