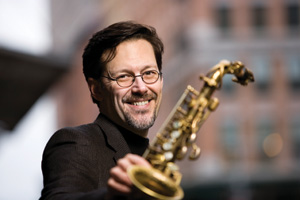 Alumni had a good night at the 58th Annual Grammy Awards in February.

Saxophonist Dave Pietro ('87) of the Maria Schneider Orchestra won in the Best Large Jazz Ensemble Album category for The Thompson Fields. Snarky Puppy, which was formed at UNT, took its second Grammy, this one for Best Contemporary Instrumental Album for its work Sylva with Metropole Orkest. And bassist and alum Marc Johnson played on and co-produced the Best Latin Jazz Album, Made in Brazil, by his wife, Eliane Elias.

Rich DeRosa, the director of jazz composition and arranging studies for the College of Music, earned a nomination for Best Instrumental Composition this year for his song "Neil," named for former One O'Clock Lab Band Director Neil Slater. Also nominated for awards were alumni Don Henley, Cameron Beauchamp, Dave Love ('85) and James Chirillo. Pietro and Chirillo are members of the Gil Evans Project, which was nominated for Best Large Jazz Ensemble.

Pietro says he was honored to be a part of such great projects.

"I love the challenge of playing with top-notch musicians," Pietro says, "and the wonderful sounds that we can make together."

Learning from the best

Pietro picked up the saxophone as an elementary school student in 1974.

"I knew very early in my life that I wanted to be a musician for a living," he says. "I was very lucky that way."

Pietro grew up near Boston but, as a college student, he wanted to explore new areas. Why did North Texas fit the bill?

"I felt there was a great vibe there. There were also a lot of outstanding players and then there was the warm sunshine, of course," he says.

He even persuaded his friend from music camp, Jeff Coffin ('90), now with the Dave Matthews Band, to transfer.

He says he learned the most from retired saxophone professor Jim Riggs and Slater.

"Jim taught me a lot about how to play the saxophone well, how to shape musical phrases and how to play lead alto sax in a big band," he says. "Neil expected us to act and perform as professional musicians in the One O'Clock Lab Band. I now pass on many of the lessons that I learned from both of them to my students at NYU."

While Pietro was with the One O'Clock, he recorded four albums and had the opportunity to travel for the first time to New York and Australia.

After graduation, he moved to New York City with his Texas license plates still hanging on his 1980 Toyota Corolla. He went from being in the top college band to being another young musician trying to get gigs.

"When I first got to New York, I realized that I didn't have my parents or my teachers anymore," he says. "I was alone and I knew that the rest of my career was going to be a personal journey."

But there were other classmates who were in the same position.

"One of the great things about going to a school like UNT is that you can develop a community of fellow students that can rely on one another," he says. "You are there to help each other throughout your careers. A lot of people think New York is cut throat. But many of the artists I'm 'competitive' with are my best friends."

Pietro has worked with some of the greats in the music world. He has performed with the bands of Woody Herman, Maynard Ferguson and Lionel Hampton and acts such as Harry Connick Jr., Michael Feinstein and Blood Sweat and Tears. In addition to being a member of the Maria Schneider Orchestra and the Gil Evans Project, he is a member of Darcy James Argue's Secret Society.

He has recorded six albums of his own, including Now Becoming Then and Standard Wonder-The Music of Stevie Wonder. He's also a composer who has received grants from the National Endowment for the Arts and Chamber Music America's New Works Programs.

He's played at Carnegie Hall and Lincoln Center and with such acts as Ray Charles and David Bowie. And he's traveled to such places as Brazil and India.

But he says, "The highlight of my career is the next gig I play."

And, at those gigs, he's likely to run into another musician from his alma mater.

"New young musicians from UNT are constantly coming to New York and I'm meeting them all the time. And there are so many musicians I met during my time as a student at North Texas that are friends for life," he says.