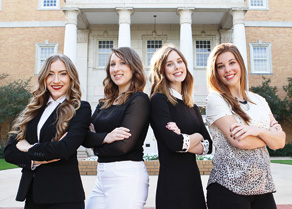 The four developed the Medici RFID Trattoria Tote concept for the online retailer eBags to capture the first-ever first place win for UNT's Department of Merchandising and Digital Retailing in the competition. Billed by the group as a "modern woman's briefcase," the tote would include specially designed compartments to store, protect and organize digital devices and essentials. They were awarded scholarships for their pitch of a product worthy of a national retailer.

UNT is the only university to have a team in the top-three finalists round in all three years since the competition began.