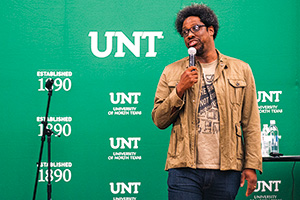 American stand-up comic and TV host W. Kamau Bell explored the state of racism in America in his February lecture at UNT, "The W. Kamau Bell Curve: How to End Racism in About an Hour."

The presentation, which included a mix of stand-up comedy, history lessons, video and audio clips and personal stories, was sponsored by the Mary Jo and V. Lane Rawlins Fine Arts Series. It also was among events attended by guests of UNT's annual Equity and Diversity Conference.

Bell is the ACLU's Ambassador of Racial Justice and sits on the advisory boards of Race Forward, a racial justice think tank, and Hollaback, a nonprofit movement to end street harassment. He is a CNN correspondent, host of the travel show The United Shades of America and former host of the FX series Totally Biased with W. Kamau Bell, which was nominated for both an NAACP Image Award and a GLAAD Award.