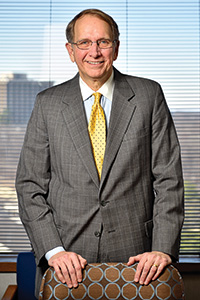 As the son of a certified public account, Don Millican ('74) always knew he wanted to follow in his father's footsteps.

"Everyone else wanted to be a baseball player or fireman, and I wanted to be a CPA," Millican says, recalling that he didn't even know what those three letters meant then or what it would mean for his future.

In high school, he was courted by many universities because of his abilities on the track field, but he was swayed to UNT because of its highly regarded accounting program and distinguished instructors known nationwide.

"There were so many greats -- Paden Neeley, Horace Brock, Paul Breckenridge, Donald Jones, Ben Copeland -- the perspective they were able to give students was amazing," says Millican. "Not only were they research-oriented faculty, but they gave great value to teaching."

After earning his degree, Millican passed his CPA exam. And today, he is the chief financial officer for Kaiser-Francis Oil Co. in Tulsa. He spent 29 years in public accounting, first with Price Waterhouse and then with Ernst & Young, where he was the Oklahoma office managing partner, helping clients ranging from Walmart to ExxonMobil. Following his 2003 retirement, he was approached by George Kaiser, owner of the oil and gas exploration company, with a career opportunity incorporating his tax and audit expertise and his financial reporting background.

Read how alumnus William Tillman ('15, '15 M.S.) used his experiences at UNT to launch a career with PwC, ranked No. 1 among the "big four" audit firms in the world.

"There are so many different possibilities with an accounting degree, and it's a tremendous resource to help you move into other careers," says Millican, who is in charge of negotiating acquisitions, managing financial transactions, overseeing tax planning, financial reporting and creating debt structures to help grow the company. "My education gave me a platform to really do something different and transform my life."

Since the 1940s, UNT's program has prepared students for careers in tax accounting, auditing, accounting information systems and the legal profession. Today, with the world's globally linked economies, new challenges such as the analysis of big data and cybersecurity threats are making the processing and communicating of financial information more important than ever. And established alumni and new grads are making their mark with positions in top public accounting firms, consulting groups and Fortune 500 companies. They are top-level executives, rising stars and business owners adapting to the changing roles of accounting and helping to reshape the landscape.

Outstanding accounting alumni include members of the UNT System Board of Regents. Chair G. Brint Ryan ('88, '88 M.S.) is the CEO of Dallas-based Ryan LLC, the leading tax services firm in North America. And Laura Wright ('82, '82 M.S.) is a consultant with GSB Advisory LLC after serving the last eight years of a 25-year career as Southwest Airlines' CFO and senior vice president of finance. She and Ryan are active with prominent tax and accounting committees, including UNT boards.

"Many of our graduates are making big impacts in the financial world, but what is really unique is their commitment to our programs and our students," says Marilyn Wiley, dean of the UNT College of Business. "They believe in us, and alums are helping recruit UNT students for internship and employment opportunities." 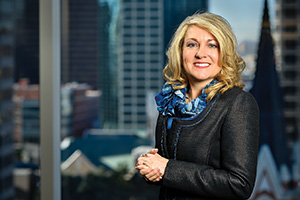 Melisa A. Denis ('86, '86 M.S.) is one of those alumni. A senior partner with KPMG, a worldwide powerhouse of professional audit, advisory and tax services, Denis leads the company's national tax initiatives in the food, drinks and consumer goods sector.

Named a "Top 25 Changemaker" by the Dallas Business Journal, Denis has nearly three decades of experience in international tax accounting that goes well beyond business. She helped start KPMG's Network of Women, which helped recruit and retain more than 600 women in its Dallas location, and she is helping to craft the company's diversity plan through its Women's Advisory Board.

"I use my career as a platform," says Denis, who received UNT's Outstanding Service Award in 2014 for her exceptional volunteer service to the university. "I help empower women to be the CEOs of their own careers, and accounting is a great place to do that."

Her involvement at UNT includes service on the College of Business' advisory board. Most recently, she spoke to students about leadership as part of the college's Distinguished Speaker Series. For Denis, connecting with UNT is important because of her own student experiences.

"My graduate admission scores were not what they needed to be, but Dr. (Hershel) Anderson looked me in the eyes and said he would help me navigate through the process," says Denis, who was accepted on a provisional basis. "He took a chance on me, and that's a huge part of my success."

She went on to complete dual bachelor's and master's degrees from the university.

"I have a responsibility and an obligation to pay it forward," says Denis. 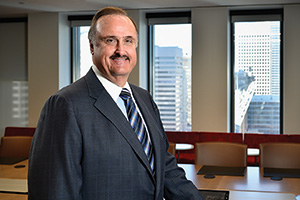 Randy Robason, a national managing partner of Grant Thornton's tax services practice, attended the Laboratory School, the model training school on campus, for 10 years and completed two years at the university. His father, G.A. "Jack" Robason, served on the accounting faculty and later as vice president of fiscal affairs.

"My experiences as a kid growing up on campus were unique, and the core elements of the university -- connectivity and concern -- are always there," he says.

After completing his accounting degree at the University of Texas in Austin, where he worked as a top assistant to the dean of the Texas House of Representatives, Robason earned his master's and law degrees at Texas Tech. Working with Arthur Andersen for 25 years, he moved up the ranks and now has more than 38 years' experience in financial and tax consulting for clients ranging from Fortune 100 companies to the Carolina Panthers.

He has been quoted in publications such as The New York Times and American Banker magazine, and he often appears on radio and television and writes for industry journals. In Robason's current role, he is in charge of growth and strategy on a global scale for a $450 million business.

"Accounting is changing at an unbelievable pace. The global economy along with big data and data mining are having a major impact on this profession," he says, adding that the scope of his travels -- six continents last year alone -- would have been unprecedented when his career began.

Like Denis, Robason has remained active with the university, endowing a scholarship in his dad's name and serving on the boards of the Professional Development Institute and the UNT Foundation.

"The value systems of my UNT professors have kicked in throughout my career," he says. "The students were important to faculty and they helped shepherd us to success."

Preparation for the future 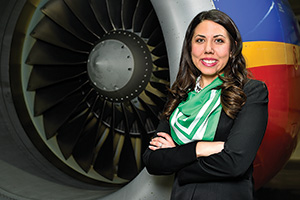 The accounting department launched an Integrated Master of Accounting Professional Program in 2014. The program not only allows students to complete two degrees in five years, it also connects them to internships, career opportunities and workshops that give UNT grads the edge.

"An undergraduate degree is extremely valuable, but the master's program really teaches you how to think like an auditor. It gives students the opportunity to develop and apply their teamwork skills, which are essential in today's business environment," says Pond, named one of Internal Auditor magazine's 2015 emerging leaders.

As a student, Pond worked as an auditor for the Denton-based nonprofit Interfaith Ministries as part of a class project, joined the Beta Alpha Psi accounting honor society and completed four internships. The experiences helped ready her for work as a hybrid internal auditor providing assurance and consulting activities for Southwest Airlines in areas such as finance and technology.

"We are not in the same world we once were," she says. "It is vital to have a secure environment from a financial and IT perspective, and UNT helped prepare me for my role in assessing and analyzing organizational risk and controls."