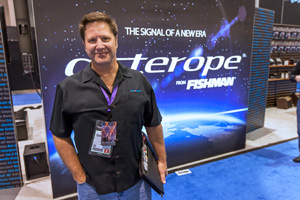 Dariush Rad ('88) graduated from UNT as an aspiring professional musician. But six years ago, he added president and CEO to his list of titles.

Rad acquired the rights to "a breakthrough in audio technology" and launched a company called Asterope with a lofty goal: to set a new standard for the way music is heard. With that idea in mind, he sat down in Ruidoso, N.M., and wrote out a business plan for Asterope. The company's cables are now being used by artists in recording studios and performance halls around the world.

"I never thought I would become a CEO," Rad says. "It's 180 degrees from being an artist and producer."

He was heavily involved in music on and off UNT's campus, recording an album called Crossplanes with his band, Dariush Rad and the System. That album did well on adult album alternative (AAA) radio, getting picked up nationally and internationally.

First starting as a music major with a concentration in jazz studies, he later switched to sociology. He was drawn to it because he likes to know how people work and says it helped him infuse the social aspects of the world into his music.

Moving to Nashville after graduating, Rad continued writing and producing music, working with world-renowned session players and engineers. As a result of his audio production work, he was "grabbed by the ear" and pulled into video and film production by some of his peers in the industry. He began working on internationally broadcast video and film projects. At that time, Country Music Television (CMT) and Music Television (MTV) were just coming out, so having a high-quality music video was important.

"We were way ahead in graphic design," he says.

Rad's skills in composing, producing and now multimedia were starting to build on one another, preparing him to establish Asterope.

"I knew this is where I was supposed to be," he says. "I had numerous relationships with world-class musicians who could help promote my product."

Rad says Asterope's technology helps solve the problem of "out of phase" sound waves that cause less clarity and more distortion in traditional cables.

He knew introducing Asterope into the music equipment market would be tough, so he worked to get leading artists and producers to become early adopters. He was approached by audio pro Larry Fishman to act as Asterope's distributor, and today, Asterope products are available worldwide through retailers such as Amazon and Guitar Center.

"It's like needing glasses and someone giving you glasses," Rad says. "We are going out giving people glasses, saying, 'Just try them on.'"

In 2012, Asterope was named Best New Manufacturer of the Year at the National Association of Music Merchants in Anaheim, Calif. Rad likes to say he will be in on more Grammy awards than anyone else because of the number of artists using his product.

"They don't want to take the glasses off," he says. "They've looked through the lenses and now they know what clarity is."