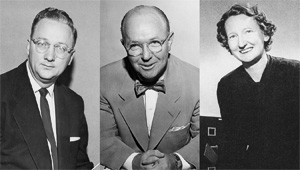 Longtime faculty members through the years comment on campus life, teaching and research. All quotes except for J.K.G. Silvey's come from UNT's oral history collection. Silvey's words are from a speech he delivered at the 1959 Honors Day ceremony.

We went down to the student center every Thursday afternoon at our rehearsal time, which was 2 o'clock then -- now they've changed to 1 o'clock -- and played for an hour down there, and all the students would come and dance. It got to be quite an institution. … In fact, I had complaints from other faculty members in the general university that students were reluctant to sign up for classes on Thursday afternoon at 2. … I said, "Well, you are going to have to learn some new jokes or something to get people to come to your class." (chuckle)

I got here in the summer of 1949, and it was a big enrollment. I was the assistant dean at that time and head of the Department of Education. A big problem we had that summer and the following summer was a large crowd of people because the Gilmer-Aikin legislation (education reforms that sent teachers back to school) had just passed. One summer we had 5,000 master's students in education on the campus. … By 1960, we were the 10th largest teacher education institution in the country, producing more teachers than all but nine other schools. Half of those people were graduate students.

This was the day of rules. There was a right and a wrong way to do things. … The rules for men were these: Conduct yourself as a gentleman at all times. That takes in a lot.

I always had an open door. I'd walk in the first day and write my room number on the blackboard. I think there might have been two phones (chuckle) in the whole building. … It was small, we knew each other, we appreciated each other. … I really believe when people know each other and understand each other, they can respect each other better, and they can accept each other better. It's the fear of the unknown that sometimes really, really upsets people.

(Creative thought) has made men free. It has separated the individual from the masses. It has given a foreground and a background to the artist, the musician, the language scholar, the political scientist, the philosopher and the scientist. … The more we develop scholarly and individual thinking in all of the disciplines, the greater our nation will be in these realms.

Each generation has its own coloration, but … in other words, what is liberal in 1920 is different from what liberalism is in 1930 and what it is in '40 and '50 and '60 and so on. But the same patterns are there. I mean, all right, so we've got a campus radical. He's a campus radical. What he's after and the way he talks is not quite the same language as it is 10 years later. But he's still my campus radical. I've heard him before (chuckle). My campus conservative, I've heard him before. No, I think human nature doesn't change much.