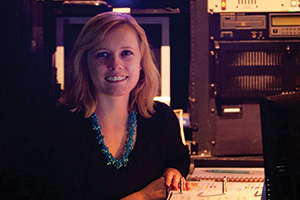 Jayme Marrs Castle ('06) may have one of the most important jobs in the theatre -- even though she's never seen on stage.

Castle has carved a career as a stage manager for musicals and operas in Austin, Dallas, Nashville, New York City, Los Angeles and Salt Lake City.

She's involved in every aspect of the production, working with actors, designers, the director, technicians and sometimes the musicians.

"I like the organization aspect as well as the control of making it all happen," says Castle, who majored in theatre with an emphasis on stage management.

She credits her teachers for her going in this direction.

"UNT gave me a strong base from which to launch my career and be successful," she says.