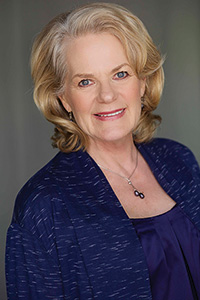 Libby Villari ('80) has been acting in Texas for 30 years. Now she's ready to take on Hollywood.

Villari, who majored in theatre, has appeared on stage in numerous productions, but her best-known roles include the grandmother in the Oscar-winning movie Boyhood and the mayor of Dillon, Texas, in the TV version of Friday Night Lights. And, she appeared in a recent episode of Grey's Anatomy. Villari didn't take the stage until she appeared in the UNT production of A Streetcar Named Desire. She was 27 years old and had only seen one play in her life.

"I was hooked after my first rehearsal," she says. "It was thrilling to transform myself into someone else, to collaborate with other students doing the same, to put on a show."

"I'm ready for the next chapter," she says. "Another series would be lovely. Actors are never done honing their craft so I continue to learn. No plans for retirement!"