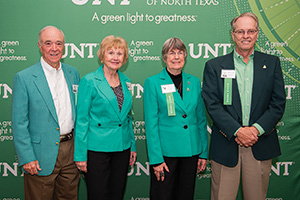 Members of the Class of 1964 reminisced at the annual Golden Eagles luncheon. Here are a few of their memories.

I was a French major at North Texas and a dorm hostess in Kendall Hall. I vividly remember room check each night and working the switchboard to direct phone calls to the women. We had to wear a raincoat over our leotards to cross the street to the Women's Gym and could never be seen in rollers in the cafeteria. It was always a treat when there was snow on the ground so we could wear pants.

Each fall Imogene Bentley Dickie, the dean of women, would gather all the freshman girls in gloves and hats in the English building auditorium to go over the rules and regulations of being a lady. That did give you the chance to see all the ladies in your class. -- Marsha Keffer ('64, '67 M.Ed.), Denton, retired director of UNT's program for academic readiness

We spent a lot of time at the Union -- the UB, we called it then. It was the center of activity. We'd go over and have coffee and coffeecake in the morning. You did not want to have a class from 10 to 11 a.m. In the afternoons, we'd go back over and have a coke. It was the place everyone congregated. You could drive right up and park in front in those days.

Most of my memories center around my fraternity, Lambda Chi Alpha. We always had a big Homecoming decoration on the front of the fraternity house on Hickory. One year it was a huge flag, another time it was an Eagle. The year it was a hand of poker we were disqualified. The Geezles claim they stole our Eagle, but I don't remember that. -- Jack Wall ('64), Dallas, former UNT Regent

Well, I had a lot of friends and Greeks who knew me since this was my fourth year at North Texas. There was some loud laughter and I joined in. The announcement made for the candidate escorted by me went like this: "She is escorted by the senior class president, Mike Murphey!" I turned around and faced the throng of fellow North Texans and waved at them with a big smile. When our team won the game, it was long-time head coach Odus Mitchell's seventh Homecoming win in a row. For me, I was Michael Murphey for a day! -- Mike McNutt ('64), Kingwood

When I moved into the new McConnell Hall my sophomore year, the air-conditioning provided relief from the heat, and in the winter, students engaged in snowball fights and buried unsuspecting Volkswagens under tons of snow.

However, the night of our 1964 graduation topped everything weather-wise. Commencement was in the old Men's Gymnasium, a relic even in those days. The hail and rain ripped through the happy scene and pounded down on the metal roof. The speakers quickly ended all attempts to speak over the din. As the crowd hurried to open the doors to head home, they were hit by a torrent of rain.

My father, who had come to see the graduation from New York City, traveled home with my aunts. He had to get out of their car in the driving rain to find the cut-off road to Grand Prairie. It simply was not visible. The night proved to be an attention-getting end to our North Texas years! -- Susan Kennedy Stinson ('64),