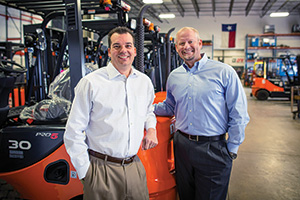 Business partners Brian Hoffmann ('00) and Bobby Barr ('97) not only realized their college dream of owning a business together, they surpassed it.

In the last two years, the two have expanded their Grapevine material handling business in square footage as well as in number of employees and customers, more than doubled revenues and racked up several awards.

They credit persistence, great employees and a strong reputation for their business success. Their philosophy is to treat others as you would want to be treated and to honor your word.

"Our biggest growth factor is word of mouth," Hoffmann, president of the company, says. "That comes from doing things the right way."

The Fort Worth Chamber of Commerce named it the 2014 Small Business of the Year for businesses with 51-150 employees. It received the 2014 Most Valuable Partner award from the Material Handling Equipment Distributors Association, and the Fort Worth Business Press in 2013 named it one of the Top 100 Private Businesses in the Dallas-Fort Worth area.

The business also was featured in a Chase Bank Platinum commercial, and in September it won the Summit Award for being one of three top Doosan dealers in the United States and Canada.

"Brian and I became successful very quick in the industry," says Barr, vice president of the company and a 50-50 partner with Hoffmann. "At a very young age, we were doing very well financially. It didn't take us long to realize that this was going to be a career."

"That was something we had talked about for quite a bit," Barr says of owning a business together. "Early on, we had no idea it was going to be this business."

They were in the same fraternity at UNT, which they said taught them communication skills and helped them as salesmen.

"Having to get to know new people develops confidence and problem-solving skills," Hoffmann says.

They also learned about persistence in college.

One professor they both remember fondly is Lou Pelton of the College of Business.

"He was really good at teaching real-world cases," Hoffmann says. "Dr. Pelton would talk about his experiences and his travels. It made me able to relate a little better. I needed to know why, or was this really going to happen. He did a really good job with that."

Barr says skills learned at UNT have proved important in building relationships with customers and vendors.

It was actually during an evening course at UNT that Hoffmann met the son-in-law of Rene Verstraete ― the founder of CE-DFW.

"They became friends, and he told Brian about his father-in-law's business and ultimately introduced Brian to Rene," Barr says.

Hoffmann joined the team in 2000, and Barr was hired in 2001. Verstraete left the business with the two when he retired in 2007.

UNT continues to play a role in CE-DFW.

Barr and Hoffmann, whose wives Sandy ('97) and Amy ('06) are also alumni, have used their UNT contacts to bring top sales people into their company. Currently, three UNT alumni work with them. They also are working with UNT to create an internship program.

Making money was a source of enjoyment for Barr early on in his career, but he says there also is great joy now in seeing the company's employees achieve their goals.

"The more people we add, we get to see some of the cool things that are happening for them," Barr says. "We have a UNT grad who works for us -- he's closing on his first house. That's a neat thing for me and Brian indirectly. We're proud of events like that because of what we've accomplished, what we've built."