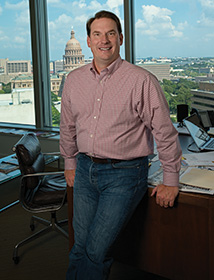 "I thought if I could teach literature and maybe coach the baseball team and write weekends and nights, that would be a pretty nice life," he says.

Thanks to one professor -- Brian May, then assistant professor of English -- Sweany found a new path that led the way to his appointment in July as editor-in-chief of Texas Monthly, one of the nation's most prestigious magazines. The title caps a 15-year tenure writing and editing for the publication, known for its well-crafted, award-winning narrative stories.

But his first years at UNT, he was most active in "Riprock's Social Club," he quips.

When he took a 20th-century British literature class taught by May, the course changed his perspective. He took a broader view of the world intellectually.

May, who now teaches at Northern Illinois University, always knew Sweany was ambitious.

"Brian was the sort of student who made you want to bring your A-game to class," May says. "This sense of expectation he had -- he really, really wanted to have a great intellectual experience -- distinguished him from other even very good students."

Get to know
Brian D. Sweany

May encouraged Sweany to pursue a master's degree.

"He was the first professor who took me aside and said I was graduate school material," Sweany says. "When you connect with a professor, it's a very powerful feeling."

After graduating, Sweany worked as a special education teacher in his hometown of Plano. He then earned a master's in English literature at the University of Texas at San Antonio, and in 1996 he landed an internship at Texas Monthly.

He was exposed to its fixtures of Texas journalism and experts in politics, food, travel, music and history. When he sat in at monthly editorial meetings, Sweany says, "It was the smartest room in Texas."

Eventually, he landed a full-time position, and aside from three years when he taught journalism at Ithaca College in New York and wrote and edited for D Magazine in Dallas, he's built a career there.

Sweany also is writing a biography of Charles Goodnight, The Kingdom of the Saddle, about the Civil War ranger, cattle driver and rancher famed for developing the Goodnight-Loving Trail and the Texas Panhandle, due out in 2016.

UNT runs deep for Sweany. He and his wife, Noelle Wall Sweany ('94), now an associate professor at Texas A&M University, were students together.

And he maintains connections to UNT by serving on the board of the Frank W. and Sue Mayborn School of Journalism, and has been a speaker at the Mayborn Literary Nonfiction Conference.

"The Mayborn has been transformative for narrative storytelling," he says. "Its conference has become a perfect symbol of what UNT can accomplish with vision, resources and talent."

Sweany says his big task now is to live up to the expectations of former Texas Monthly editors.

"I have long felt that this was the best magazine in the country," he says. "Now, to be the editor, it is the peak. I'm a native Texan. My children go to school here. Under every editor, the magazine has become better and better.

"The real challenge is how do you take something so good and improve upon it?"