After working for 28 years as director of UNT's Child Development Laboratory, a pre-school for 3-to-5-year-olds in Matthews Hall, she can remember them clearly when they come back to visit.

Take the time Ashten Yarberry, now a sophomore chemistry major at UNT, came in with her mother. Hagen said she remembered Ashten had very curly hair. Her mother didn't think so until -- to her surprise -- Hagen found a picture of her.

"I didn't realize I did have curls," Yarberry says. "Usually I had really straight hair."

"I remember her just as  she was," says Hagen, the center's director and senior lecturer of teacher education and administration in the College of Education. "I'm not saying I could do that with every child. But Ashten was here for two years, and I definitely remember her."

And, for the families, the lab has been a memorable place too, where students learned to play with others and developed their reading and writing skills. Education students  earn credit for their education degrees and learn the skills they need for their teaching careers, which has always been the focus of the lab since it first opened in 1927.

Last fall, Hagen was named Director of the Year by the National Coalition for Campus Children's Centers and, in 2012, she was named Teacher Educator of the Year by the Texas Association for the Education of Young Children. The program was reaccredited by the National Accreditation Commission for Early Care and Education Programs in the fall of 2013. 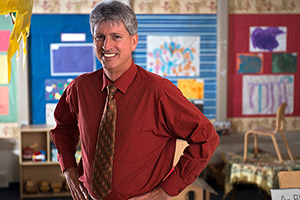 But evidence of the lab's greatest success may come in the form of stories from families and in its overwhelming popularity -- some parents get on the waiting list as soon as they find out they're expecting a child. Yarberry skipped kindergarten, in part because of the lab's curriculum. Austin Garcia, now a junior at Pilot Point High School, still keeps up some of the same friendships he started while at the lab. Gary Miller ('02 M.Ed., '13 Ed.D.) was inspired to pursue a career in elementary education after enrolling his two children there.

Jennifer Ishmael ('01, '04 M.S.), who attended the lab when her mother was a college student in the mid-1980s, feels lucky her son Hunter, now 6, attended two summers ago.

Ishmael, adjunct lecturer for merchandising and digital retailing, remembers how Hagen acted when her son cried on the first days of school.

"She always was gentle with him. It was a safe place," Ishmael says. "She made me feel that I wasn't inconveniencing them. I was doing the right thing by leaving him."

Hunter stopped crying after a few days. He loved working on the computer, playing basketball or hanging out at the reading nook. By the end of the summer, he could write his name perfectly.

"He loved it whenever he was there," Ishmael says. 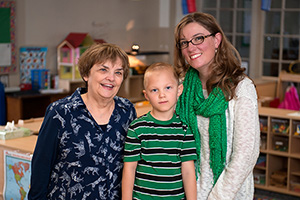 Children quickly adapt to the lab school, which has space for 50 children at one time and its own playground. The classrooms are divided into centers that include art, blocks, dramatic play, science and other spaces with play and learning materials.

One storage room is packed with activity boxes so that children can role play jobs and activities such as  post office, veterinarian, kitchen or hair salon. Sometimes, they play grocery store, complete with plastic food, carts, registers and literacy materials such as  grocery lists and coupons.

For a familiar touch, a bulletin board features pictures of the children's families.

An upstairs observation room allows student observers and parents to observe the children. Lisa Garcia ('97), who works in purchasing and accounts payable for the University Union, often went there during her lunch breaks to watch her son Austin.

When Austin Garcia, now 16, came back to visit Hagen last September on his birthday on his way to get his driver's license, he says, "It almost looked exactly like I remembered except the technology had changed."

Hagen noted some activities -- such as painting on easels, playing on the playground and singing -- always are part of the program.

"A lot of things change in subtle kinds of ways," Hagen says, but the basics stay the same.

Lisa Garcia appreciated that the teachers read often to her son, and he scored above average when he was tested in elementary school. She also liked that he was exposed to students from different cultures through events such as International Day, Lunar New Year or the Hindu holiday Diwali.

"The lab was just a well-rounded experience for him," she says.

Yarberry was well-ahead of her fellow classmates in elementary school and even skipped kindergarten after attending the lab -- which she partially credits to the lab's emphasis on reading. She received a full scholarship to UNT and hopes to pursue a career in forensics.

She says, "I knew just about everything they were teaching in the kindergarten class."

Ishmael remembers painting and learning her colors. She says her son learned how to work in a social circle.

"I think it was the best transition into kindergarten he could have had," she says.

For one family, the lab proved beneficial to the children and their father.

Gary Miller's children -- Melissa, now 32, and Ryan, 25 -- attended the program. His daughter is now studying for her doctorate in Russian Language and Literature at the University of Wisconsin. His son Ryan has graduated from the University of Texas at Austin with three majors -- Arabic Language and Literature, government and Middle Eastern Studies and is working with Arabic-speaking immigrants in Chattanooga, Tenn. Miller says the lab's many international families and culturally diverse curriculum planted a seed that blossomed through his children's careers years later.

He talked to Hagen, who advised him to consider early childhood education, since he was excellent with his own young children. He quit his job at a local plant nursery, and enrolled in UNT's education certificate program, which allowed him to participate as a student teacher in the lab. About 60 students each semester teach in the program as part of their education degree requirements.

The children at the lab school called him "Mr. Gary," and he enjoyed engaging with them. He says being a teacher requires not just instruction and curriculum, but learning to have empathy and understanding of children.

He worked as a teacher, principal and central office administrator in the Keller and Denton school districts for 16 years and now is an assistant professor of educational leadership at UNT.

"For me, it all started at the lab school," he says. "That's where I learned what it takes to be an outstanding teacher."