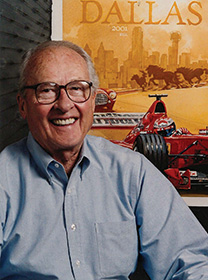 Bill R. Neale's ('48, '53 M.A.) professional life has been all about art, advertising and automobiles. The famed automotive fine artist worked in advertising agencies in Dallas for much of his career, and he was inducted into the Southwest Advertising Hall of Fame in 2011 by the American Advertising Federation 10th District for outstanding contributions to the advertising industry and community. He worked on campaigns for Haggar, Mrs. Baird's, Pearl Beer and First National Bank and founded Point Communications, where he was president and CEO. His career took shape in the classrooms of North Texas, where Cora Stafford, the legendary art teacher who taught from 1921 to 1964, encouraged him to go to art school in California.

From art school, he went on to advertising. For one campaign, he worked on auto illustrations, which led to his full-time career as a painter of automobiles and race car drivers, creating work for Shelby Automotive and Automobile, Road and Track, Car and Driver, Motor Trend and Cavallino magazines. His work has won awards in the U.S., Europe and South America.

Neale competed as a racer himself and owns two Mustang race cars. A former Navy pilot, he also enjoys aviation.

Racing and flying brought the same excitement he gets when seeing his art in national magazines. "It was a thrill," he says.