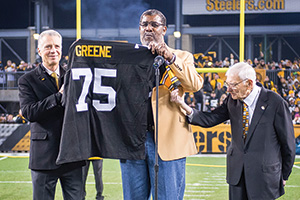 A star football player at UNT from 1966 to 1968, Greene was a consensus First-Team All-American as a senior. He was a No. 4 overall pick by the Steelers in the 1969 NFL Draft, leading the team to its first Super Bowl in the 1974 season and to three other bowl wins as part of the famed "Steel Curtain" defense.

In women's volleyball news, junior outside hitter Carnae Dillard earned the conference's top award – C-USA Player of the Year. It is only the second player of the year award ever earned by a Mean Green volleyball player. She also was named Sports Imports/AVCA Division I National Player of the Week on Nov. 11.

The 2014-15 Mean Green basketball season kicked off this November, with high expectations for both the men's and women's teams.

Players to watch this season on the men's team are seniors Jordan Williams and Colin Voss. Williams ranks 19th in school history in scoring and is expected to rank in the Top 10 before the season is over. Voss is the Mean Green's second-leading rebounder.

Women's basketball is looking to improve its 12-18 record from the 2013-14 season with the help of standout players like sophomore guard Candice Adams. 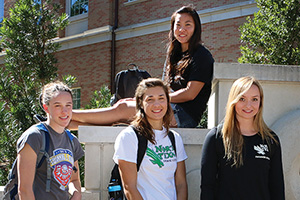 The Mean Green swimming and diving team was recognized as having the second-highest GPA among all such programs in the nation last fall.

Senior swim team members Sarah Manning, Krista Rossum and Chloe Tong, along with junior Michelle Balcaen, are using their academic success to set the stage for potential careers in medicine. The four student-athletes are enrolled in UNT's pre-medical program. Balcaen, Manning and Tong each major in biology, while Rossum majors in biochemistry.

They are a perfect illustration of the team's academically focused mindset, says their head coach, Brendon Bray.

The Mean Green basketball teams will have new amenities.