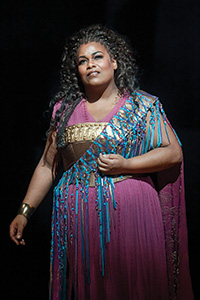 Latonia Moore's debut at the Metropolitan Opera in 2012 was, as she puts it, the ultimate experience as an opera singer.

She sang the title role in Aida, as she had the year prior at Covent Garden in London. The Verdi opera has been performed countless times since 1871, but when Moore sang at the Met, she did so armed with the advice given to her years earlier by former UNT vocal professor Pattye Johnstone.

"'Sing with your natural voice,'" Moore remembers Johnstone directing her. "She didn't like fake productions. When I had the chance to sing as Aida, I had a choice ― I could sing it like this ideal voice I have in my head of how Aida is supposed to sound, or I could do what she had said and do it in my own voice."

Moore's own voice won out and she received an enthusiastic ovation from the Met's audience as well as calls from opera companies worldwide to perform as their Aida, a role she most recently performed in November for the Bergen National Opera in Norway.

Her latest role as Wally in the Dallas Opera's version of La Wally in late January and early February returns the Houston native to Texas and gives her an opportunity to re-connect with friends, such as tenor Carl Tanner, who plays Wally's beloved Hagenbach.

"I'm excited about the performances because La Wally is more along the lines of verismo opera ― the kind you see in dramatic Italian operas, even though this is not set in Italy," Moore says. "I love the verismo style because it's very pour your heart out on stage."

Get to know
Latonia Moore

Read a Q&A about Latonia Moore

That style, too, connects with other advice Johnstone gave Moore as a young singer.

"She would always say, 'Touch the audience's hearts,' and at the time I thought that sounded a bit cheesy, but I realized she was right," says Moore. "The audience isn't going to care about your technique if you can't communicate emotion."

Although she originally came to UNT in January 1997 to study vocal jazz, it was only through opera that she was able to fully learn how to express emotion on stage.

"As a young singer, I didn't know the real soul needed for jazz, but I knew how to perform operatically and become a completely different character," Moore says. "When I step on stage, I try to keep my performance as close to how I believe that character would react as I can. I put every bit of my energy into my performances and my career."

Being successful in opera requires that dedication and determination, Moore notes. Yet, when young singers ask for advice, she tells them they also have to find the path that is right for them ― advice that works for everyone.

"In any career, you have to research what is right for you and find the teachers and the mentors who will guide you in a way that is right for you," Moore says. "Everyone has obstacles and shortcomings, but in order to be successful you have to see that those don't matter. You can't just say, 'I have these shortcomings and that's what prevents me from moving ahead.' You have to be a chameleon and find your way.

"And, you have to stay true to yourself. If you try to live a life just like someone else, you'll always end up being second best to them."