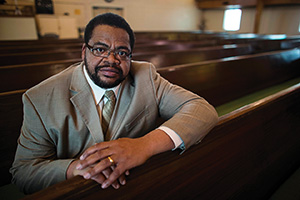 The Rev. Kyev Tatum ('91), a teen father who grew up poor and ill-prepared for college, says he found his purpose with the help of mentors, including many at UNT. Now he's helping others do the same.

In  October, a White House representative asked the former Mean Green wide receiver to serve as White House ally for President Barack Obama's My Brother's Keeper initiative in Fort Worth.

"When the president sends out a call to address those in need," says Tatum, a Fort Worth pastor, "you answer the call."

My Brother's Keeper, a "cradle-to-college-and-career" strategy, was launched this year to help boys and young men of color in particular realize their full potential. Tatum, who leads the Tarrant County chapter of the Southern Christian Leadership Conference, a civil rights group founded by the Rev. Martin Luther King Jr., says the initiative is about closing opportunity gaps and helping young men who need support in school and in life.

He organized an action summit in December that included UNT students, and he's working to bring in more White House allies to help with the effort.

"We can change the course of history for these children," he says. "I'm the perfect example. There were people in my life who said, 'You can do it.'"

Tatum, who majored in criminal justice at UNT, says Greg Sawyer, the dean of students at the time, introduced him to King's message and encouraged him to attend a Martin Luther King Jr. commemoration.

"I got a whole new feeling about myself," Tatum says, adding it propelled him to get involved with student organizations and student government.

Others who impacted him included coaches Corky Nelson and Ron Shanklin, as well as Alfred Hurley, then president and chancellor, and Bill Luker, who was the dean of what was then the School of Community Service.

"Places like UNT did not give up on me," Tatum says. "That's why I'm excited about the My Brother's Keeper challenge."