The following are excerpts from letters found in the campus time capsules, unearthed in April. Jan Poindexter Sholty ('63, '97 Ph.D.), who died in 2002, was an English major when she wrote her letter in 1962, at the end of our first school year as a university. She went on to teach as an adjunct in the English department.

1962 has been a magic year for North Texans -- University Year! The change in North Texas State College was more subtle and more profound than simply a change in name. In 1962, students were prouder, scholarship more important, and spirit more vital and purposeful than ever before. ...

There is very little that is stable or secure in this world of 1962 -- and the students of North Texas are acutely aware of world problems and impending dangers. But I think we are seeking more than material security. I think we are looking for the security of genuine values.

There are, you see, some values that, once learned, do not crumble with passing time. The security that comes from understanding is the security sought by my generation. That is why we have come to the university -- to grow in wisdom, to learn the things that will last. We hope you will enjoy looking at the old annual and papers in the capsule, and also that you will profit from remembering a great year in the history of your university.

Most of all we hope that you realize that the things that were important to us -- really important -- are still important to you.

Jack Wheeler ('61, '61 M.B.A.) was an alumnus and former dean of students and vice president for public affairs when he wrote a letter for the capsule in 1988, when NTSU became UNT. He was student body president in 1960 and active in Sigma Phi Epsilon and other groups. He died in 2011. 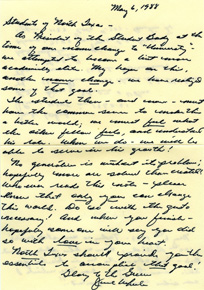 As President of the Student Body at the time of our name change to "University" -- we attempted to become a bit more academically elite. My hope on this, another name change, we have realized some of that goal.

The students then -- and now -- must have the common sense to make this a better world; we must feel what the other fellow feels, and understand his role. When we do, we will be able to serve in his growth!

No generation is without its problems; hopefully more are solved than created! Whoever reads this note, please know that only you can change this world. Do so with the gusto necessary! And when you finish, hopefully someone will say you did so with love in your heart.

North Texas should provide you the essentials to accomplish that goal!

Glory to the Green
Jack Wheeler

Donald Griswold ('88) was the outgoing president of the Student Association when he wrote for the 1988 capsule.

The entire NTSU family is excited about the changes ahead. ... It is a time when we realize our decades of accomplishment and recognize the diligence and dedication that was necessary. ... In my farewell address, I intend to leave our members with the following thought. "Remember where you have come from, then you will always know where you want to go."