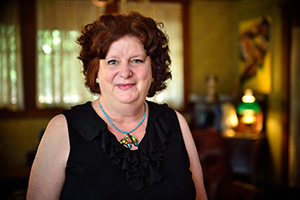 With 30 years' experience as a licensed counselor, Annetta Ramsay ('82 M.S., '89 Ph.D.) knows how to listen -- and now, she is discovering the power of her own voice to help individuals heal and recover from struggles with eating disorders. Through the OpEd Project, a fellowship largely designed to bring female voices to the male-dominated realm of opinion writing, Ramsay is reaching a wider audience.

"They're teaching you to use your voice," says Ramsay, who was named an OpEd fellow in 2014 through Texas Woman's University. "Eating disorders' is my voice. It speaks to 30 million women and men in this country who struggle with disordered eating, and millions who care about them."

It's a new role for Ramsay, who is the founder and director of the Chrysalis Program, a Denton-based non-profit specializing in treating anorexia, bulimia and overeating disorders with a six-person team -- including alumnae Laura Pace ('07 M.Ed., '11 Ph.D.) and Whitney Bunch ('13 M.Ed.). She founded the center after her administrative career at UNT.

Her year in the OpEd Project has included mentoring and editing with novelist Martha Southgate and seminars and live web chats with editors at CNN, The New York Times and other top media outlets. Ramsay joins leading female and underrepresented male scholars from institutions like Harvard, Stanford and Yale for training in using their expertise to lead discussions in print, broadcast and online commentary forums. She's written pieces alongside Sen. Patrick Kennedy and Katrina Mason, national director of the Eating Disorders Coalition, and has contributed 18 opinion articles in top publications like Pacific Standard and the Dallas Morning News. One of her most impactful stories was a poignant post for families: "Parents Can Help Make Eating Disorders Go Away." The February post became the top-rated article at Women's eNews for the week. A single tweet showcasing the op-ed reached 216,000 Twitter account holders.

"I used to want to write a book," Ramsay says. "But if you can get a short article tweeted to a quarter million people, why would you write a book?" In the late '70s, I met Bob Patton who convinced me to enter the exercise science program.