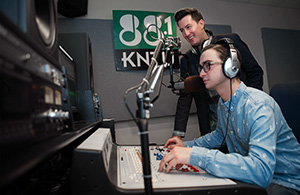 Mark Schectman ('05), who majored in radio, television and film, returned to campus as a fill-in host of North Texas Jukebox, which he helped to start as a student. The program, airing Sundays from 7 to 10 p.m., is KNTU's only all-request show for any genre of music. Schectman, voted Best Local Music Advocate by readers of the Dallas Observer, trained the show's current student DJ, Bennett Morris, to take over as the new host on March 22.

Morris' debut was the same evening as Schectman's debut on The Local Ticket, which airs opposite North Texas Jukebox from 8-10 p.m. Sundays.

"Mark and I have stayed in touch over the years since he graduated," Lambert says. "I couldn't have been more pleased that he had the time, and willingness, to come back and help a current student at KNTU learn how to do a show that he helped create. Bennett was able to learn some on-air skills from a really good broadcaster and Mark got a kick out of reliving some of his past."

Schectman adds, "I had some of the best times of my life at KNTU, so it was an honor to get asked to come back and help out. Having the opportunity to work at a fully operational radio station on campus, under the guidance of Mark Lambert and (KNTU general manager) Russ Campbell, was instrumental in my career. I loved seeing the enthusiasm for radio that Bennett and the rest of the current students have." The winter issue noted several individuals giving back to UNT, including Jordan Case.