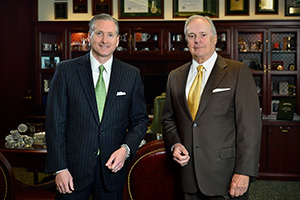 College of Business accounting alumni G. Brint Ryan ('88, '88 M.S.) and Rhys Best ('69) chose to attend UNT for different reasons, but they both walked away with experiences that helped to shape them into leaders in their fields and the North Texas region.

"My family moved from Hartford, Conn., to Dallas in 1951.We lived in the same area of North Dallas for grade school through graduate school," says Best, a commuter student who enrolled at UNT for its high-quality education and close proximity to his home and full-time job. "I had fairly vague career aspirations until my sophomore year at UNT, when I began to aspire to a well-paying accounting or banking job."

For Ryan, choosing UNT came down to a pair of alligator boots and family tradition. He had his father's blessing to "attend any college I wanted as long as it was a state school in Texas."

"My uncle, Jack B. Wilson Jr. ('66), was a very successful graduate of the UNT accounting program, so I was aware of the school and the program," Ryan says. "He had a pretty slick pair of alligator boots, so that made him the most successful person I had met up to that time. I also discovered that UNT was quite a distance from my hometown, Big Spring, Texas. This, and my uncle's prior success, made UNT the choice for me."

Today, both Ryan and Best credit "giants in the field of accounting" --  UNT faculty mentors Horace Brock, Paden Neely, George A. Christy, Hershel Anderson and Ted Klammer -- and their experiences as students for helping them turn lofty career ambitions into reality. In 2014, they were both recognized for being top leaders in their fields. Ryan was named 2014 International Business Awards Chairman of the Year. Best was honored as the 2014 Director of the Year by the National Association of Corporate Directors.

Ryan serves as chairman and CEO of Ryan, an award-winning global tax services firm in Dallas, which last year produced savings and tax recoveries of $2 billion. His firm is recognized as having the largest indirect and property tax practices in North America and the seventh largest corporate tax practice in the United States. In 2015, Ryan was one of the top 10 large employers named to the Best Companies to Work for in Texas list and was selected to Fortune's 100 Best Companies to Work For in the United States.

"The International Chairman of the Year Award is particularly meaningful to me because it recognized my efforts in creating a successful global enterprise," Ryan says. "Building a business in 20 countries or more is a serious challenge for even the best of the best."

He adds that being at the top came through hard work and tenacity.

"I left Denton in the spring of 1988 with a graduate degree and a position with Coopers & Lybrand, one of the Big 5 accounting firms at the time," says Ryan, who also interned for IBM before earning his graduate degree from UNT. "For me, this was an impressive transformation for an undisciplined college student who was clueless about the world. UNT gets most of the credit for helping me grow up in a hurry."

Ryan says it also takes being a risk taker and never giving up to succeed, something he learned growing up in a family of entrepreneurs and accountants.

"I travel more than 100 days per year, and I'm constantly helping clients in big emergencies," he says. "You never know where you're going to end up or what you'll be working on."

Apart from professional work, Ryan serves as chairman of the UNT System Board of Regents. He says it's his way of paying it forward.

"I was fortunate to co-chair the search committee that recruited UNT President Neal Smatresk, and I'm very proud of that accomplishment," he says. "I've also contributed to many operational and financial improvements at UNT and the System. It's very gratifying to use the experiences that UNT enabled me to have to come back and help improve the university."

Best, a savvy businessman who is active in corporate leadership and governance, began his career in the banking industry. He obtained his first job, working for Preston State Bank, his junior year at UNT. Years later while earning his graduate degree, he worked in the investment division of First National Bank in Dallas. He went on to serve as president of First City Bank in Dallas, the city's fourth largest bank at the time.

"I was fortunate that my banking career included ever-increasing responsibilities throughout many aspects of commercial banking," says Best, who by the late 1980s found his true niche in leading and helping rebuild companies.

During his service, Lone Star began joint ventures in Brazil and China and alliances in India, Colombia and Russia. He retired as chairman and CEO when the company was bought by U.S. Steel in 2007.

"I don't consider myself retired," Best says. "My strength is working in business environments where there are complex problems. I enjoy being able to conduct a short study and quickly develop and execute the appropriate solutions."

He also continues to provide leadership oversight and auditing services for companies, specifically those in the oil and gas and industrial fields. He currently serves on the board of directors for five companies -- Austin Industries, MRC Global, Cabot Oil and Gas, Commercial Metals Company and Trinity Industries.

"I enjoy building a successful enterprise," he says.

His exemplary leadership skills were instrumental in his being named Director of the Year by the National Association of Corporate Directors.

"To receive such a recognition by a group of your peers is always satisfying," he says, adding that UNT's supportive learning environment and faculty helped build the foundation he needed to succeed.

"I had early success with accounting courses and business courses," he says, "and these provided the basic skills and confidence I needed to land my very first position in banking."

That confidence still drives him today.

"A successful day for me," Best says, "is providing sound, thoughtful advice to the CEOs who lead the companies I serve."