Get to know
Joyce Eaton Pennington 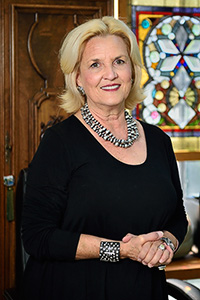 Degree in: Physical Education and minor in English and Biology

Favorite campus memories: It was an honor to be a Yucca Beauty twice at the same time with two future Miss Americas, Phyllis George and Shirley Cothran Barret ('73, '74 M.Ed.). That's my claim to fame. I also was in Angel Flight (the women's auxiliary of Air Force ROTC), a big deal in the '60s and '70s. I attended in the era of 'Mean' Joe Greene. I didn't miss a football game.

Coming back to UNT: We decided about 20 years ago that the UNT Coliseum and campus would be a great place for the annual American Dance/Drill Team competition. The facilities were fantastic. Plus, Steve Selby ('70) was the director of the Coliseum at the time and he was a P.E. major when I was a student. I was so proud to host this event at UNT and it grew quickly into one of the largest-grossing events in Denton.

Favorite place on campus: After classes, we always loved to go and hang out in front of the UB (Union Building) as you could always see just about anyone while reading a book or just soaking up the sun. I attended every home football and basketball game at Fouts Field and the Men's Gym and went to school dances in the Women's Gym. We had Chicago Transit Authority (the band later known as Chicago) play one time and had other notable musical groups.

Why she loves dance teams: It is something that is a team effort. I think there's something euphoric or joyful about dancing.

How dance has changed: Twenty-five years ago, the Texas Education Agency implemented the dance in fine arts program, which requires that dance team directors and teachers in the schools be fine arts certified. The drill team dance styles used to be jazz, kick, military and pom ― now there are 14 styles of dance. The curriculum includes ethnic, tap and modern dance. That's why Texas still leads the country in precision dance.

Advice for parents:  Dance and drill team is a wonderful way for young women (and men) to become involved in a group performing art. They learn discipline, poise, confidence and how to work together with respect, and they learn to accept constructive criticism that will be an asset to them in any job setting. It builds skills that will last a lifetime.