Former star women's basketball player and 2007 UNT Athletic Hall of Famer Jalie Mitchell ('02) returned to her alma mater this spring to serve as the new head coach for women's basketball. Mitchell is the eighth head coach in the program's history, taking on her first career head coaching position and dream job. She previously was an assistant coach at UNT, the University of North Carolina at Wilmington and the University of Texas.

A letter winner with the Mean Green from 1998 to 2002, she finished as the all-time leading scorer with 1,764 points and tops the list of career free throws made and attempted. She earned all-conference honors all four years at UNT. Her No. 44 is one of only two numbers retired by the program.

The North Texas Cheer team competed at the National Cheerleaders Association & National Dance Alliance Collegiate Cheer and Dance Championship in Daytona Beach, Fla., this spring. The squad competed in the Division I All-Girl Intermediate category, finishing 13th place in the competition and representing the Mean Green Nation with pride. 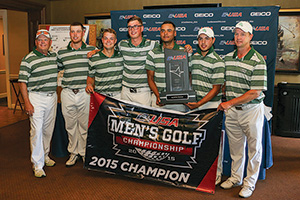 The Mean Green men's golf team captured its first Conference USA championship this spring. Sophomore Cory Churchman made a 5-foot birdie putt on the first extra hole to clinch the C-USA title for the Mean Green and seal a hard-fought win over No. 30 UAB. Churchman and senior Juan Munoz were named to the C-USA All-Tournament team, and UNT clinched the automatic bid to the NCAA tournament, making its 34th appearance.

Forty of our student-athletes had a 3.75 GPA or higher and also received the Commissioner's Academic Medal.

The Mean Green football team had the most honorees, with 31 student-athletes on the honor roll, followed by swimming and diving with 28 honorees.

Mean Green football action begins this season with an away game right in our backyard. Plan to be a part of the sea of green at Ford Stadium in Dallas as the Mean Green and Southern Methodist University face off Sept. 12.

And join us at Apogee Stadium Sept. 19 for the home opener against Rice. Visit Mean Green Sports for the full schedule and ticket information.