UNT helped shape the lives of this new graduate and her family. 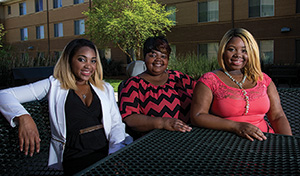 On May 16, I graduated from UNT. The event meant more to me than earning a diploma. It meant I'd be moving forward from a place where I'd found family, literally and figuratively.

Three years ago, I was invited by a friend to attend a spring football game at Apogee Stadium, and that very day, I knew UNT was where I belonged. What I didn't know then was that my mother and my sister, Whitley, would follow me to UNT -- and they'd both be living in the dorms on campus.

When they received their acceptance letters, I was ecstatic. First came my mom, Darla Ray, who had taken her first college classes in 1984. Last year, she decided to move into a dorm to get the full college experience, and Whitley joined UNT as an Emerald Eagle Scholar.

I was so happy to have my family here. When I was in high school and Whitley was in middle school, my mother was diagnosed with a rare autoimmune disease. She didn't expect to live to see our high school graduations.

I watched my mother's strength in pursuing her dreams no matter what obstacles she faced or what other people thought. And when my sister and I saw her on stage at the Homecoming yell contest, wearing a feather boa and dancing in her wheelchair with the Traditions Hall group, we knew she was making the most of her second chance at college life.

For me, it all started at that spring game at Apogee Stadium, and I began right then and there making a list of goals I wanted to accomplish by the time I graduated. I set the first goal when I saw a group of people sitting on the 40-yard line with shirts that said "NT40." I had no idea what that meant, but I knew they were special and I wanted to be a part of that group.

The second goal was to get into an organization that would continue to develop me mentally, emotionally, professionally and spiritually. The last goal I set was to be remembered for how I impacted my community and, more importantly, for how my community impacted me.

The first semester I attended UNT, I was inducted into NT40, a group I learned was focused on philanthropy, student leadership and UNT pride, and I was voted onto the executive board.

By my second semester, I was serving on the executive board for the Black Student Union.

As I grew on campus, UNT administrators listened to my concerns as the child of a woman who struggles to walk, and I helped advocate for more ADA accessibility on campus.

As a converged broadcast media major working with NTTV, the student television station, I met actress and producer Vivica A. Fox and interviewed hip-hop artist B.o.B. My involvement at UNT helped me make lasting friends.

Sometimes I wonder where I would be if I had not attended UNT. Would I have had a successful college career? Would I even have stayed in school? I remind myself there is no day but today, and I was chosen to be an Eagle for a reason.

My mother is on track to graduate this summer with her degree in rehabilitation studies, and Whitley begins her sophomore year as a fashion design major this fall. It was so special to have my family here with me that I wouldn't change it for the world. Some may think it's weird, but I think it's wonderful. We write our own rules and we create our own destiny.

Smith plans to spend a year with Teach for America in North Carolina before working in TV news production. She hopes to own her own news agency one day to provide a voice in the media for those with disabilities.