More on logistics
at UNT

Read a feature story about how UNT logistics is driving effective supply chains. 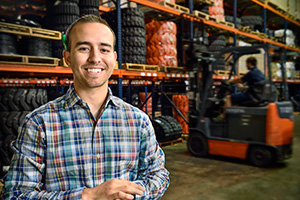 Logistics alum Nathan Chaney ('09) has an innovative spirit, having founded several independent ventures, and he is embracing that spirit in his latest promotion as one of the first U.S. branch managers for Mainfreight, a global provider of transportation and logistics services which has expanded to the U.S.

"For someone with entrepreneurial drive, it's awesome," says Chaney, who is in charge of Mainfreight's Grapevine warehouse, which is slated to expand to two locations in Flower Mound. At the warehouse, he is responsible for recruitment, hiring, accounting, operations management and sales. "The warehouse is an important part of the supply chain."

The warehouse provides clients easy access to on-demand inventory for major retailers, including organic cloth diapers, protein shakes, jewelry, medical devices and supplies, and premium wild bird feed. Daily, trucks arrive delivering new cargo. From there, teams unload, sort and store the items until needed to fulfill orders. From natural disasters like hurricanes or earthquakes to worker strikes at ports or railroads to a major retail sale for the holidays, warehouse employees must be ready to move at a moment's notice.

As a UNT student, one of four ventures he has been involved with, Bandolo Designs, won the second place, $15,000 award from UNT's Murphy Center for Entrepreneurship for its 2011 New Venture Creation Contest.

"I've interviewed graduates from other schools who haven't had any industry or corporate knowledge at all," says Chaney, who transferred to UNT's program from Tyler Junior College in 2007 after a recommendation from a professor. "As an interviewer, I know I'm going to have to teach them everything. What UNT does to give students a look at the real world outside of school gives them a leg up as graduates."

Before graduating, he completed two internships: the first with CEVA Logistics, a leader in freight management and contract logistics, where he developed standard operating procedures and a yard management software system to manage the 150-plus trailers and containers on site, and the second with PepsiCo, helping to develop models to measure the company's carbon footprint across its numerous brands. The month following graduation, Chaney started with Crane Worldwide Logistics as a sales support specialist before being promoted two months later. He moved into his current role at Mainfreight a few years after joining the company in 2011 as an operations specialist helping to design warehouses to optimize work flow and distribution needs.

And, as he has advanced in his career, Chaney says he has noticed that UNT grads stand out.

"They have a different work ethic," he says. "It's more than just graduating with a 4.0. At the end of the day, it's their attitude that gives UNT logistics students an edge."