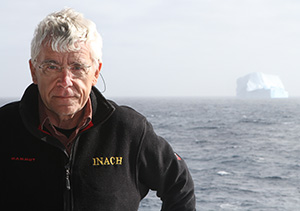 For nearly a month this spring, James Kennedy, Regents Professor of biology, and Tamara Contador ('06, '11 Ph.D.), a professor at the University of Magallanes, braved chilly weather and icy conditions to conduct research in Antarctica.

The large undertaking involved 25 research projects and more than 200 scientists and Chilean Navy personnel. Scientists canvassed an area that included Antarctica and the South Shetland Islands, an extensive archipelago.

"This was a very noteworthy expedition," Kennedy says.

Kennedy and Contador focused their research on the distribution, phenology and physiology of the Antarctic Midge, the only winged insect native to Antarctica. The midge is being evaluated as a long-term monitor of the continent's climate change.