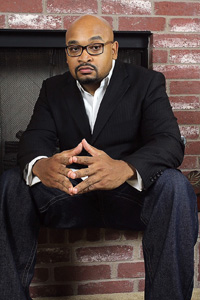 From suffering from an unexplained head injury when he was six months old to having severe kidney issues, Jonathan Johnson ('08) found growing up was anything but easy. But that didn't keep him from accomplishing his goals and even writing a book.

Johnson wants to help raise awareness about kidney health after spending 17 years in and out of treatments.

Johnson even launched his own foundation aimed at helping children who need a transplant and who need help with the financial burdens that come with it. His foundation, Mae Brown's Kidneys 4 Kids, launched in May 2015 and is named after his foster mother, who introduced him to the couple who adopted him.

"I was blessed because my parents had insurance," he says. "My goal with starting the foundation is to raise awareness about diet, fitness and lifestyle."

Because he wants to help students finish high school and get their diplomas, even if they're tempted to quit, Johnson is currently planning an event called Drive to Graduation for incoming high school seniors.

Born as a result of an assault, Johnson lived with his mother until he was six months old and then went into foster care after the unexplained head injury. He was adopted by his parents at the age of 2. It wasn't until he was 15 that his kidney trouble surfaced and he learned his kidneys were functioning at 13 percent.

It seemed like things couldn't get much tougher, but Johnson had to go through two transplant procedures after the first kidney spoiled when it was put in a refrigerator instead of a freezer. The successful transplant surgery came on Thanksgiving Day in 2001.

"My parents had already prepared dinner, but my dad told the hospital to give us an hour to eat before we came," says Johnson, who had to begin fasting for the surgery. "I had to watch them eat Thanksgiving dinner knowing I wouldn't get any."

Even though a table full of food was hard to resist, Johnson says what he got in return was far more valuable. He started writing about his experiences when he was 20, as it was like therapy for him, he says. It took him two years to finish his book, A Fighting Chance, which was published in 2012.

Johnson attended UNT after caseworkers thought early on that high school was as far as he would go. He had a different mindset and planned to pursue more education.

"I took it upon myself as a challenge," Johnson says. "I made it a personal mission to succeed to prove them wrong and show them I could."

UNT and the Department of Political Science had a big impact on Johnson -- especially one of his professors, the late Steven Poe. Johnson says after he told Poe what was going on in his life, Poe told him to come by his office any time if he needed to talk.

"He showed me that he really cared about me," he says. "It really helped mold me into the man I am today."

After graduating from UNT, Johnson got a job with the Dallas County district attorney's office, where he stayed for five years before moving to his current job as a caseworker for HMS Health Management Systems. He says that is where he'll be for now. In the future, he would like to devote all his time to running his foundation.

"If I can overcome everything that I have in my life," he reminds students, "then you can get through high school and get your education."