Events across campus commemorate the university's founding in 1890.

UNT was founded on a vision that was as bold as it was simple -- to be a leader in educating the young men and women of Texas. Today, as a university of more than 37,000 students with 380,000 alumni around the world, we are proud to be ranked a Tier One research university by the Carnegie Classification. That puts UNT among the nation's top 115 research institutions and marks a key milestone in our journey toward national prominence.

To highlight the university's legacy and excellence in teaching and our 125th anniversary year, the UNT community came together for Wingspan Week in April.

The week was full of milestone events, from the dedication of the new University Union to the inaugural Wingspan Gala. Other festivities that took place across campus included:

The new University Union was the showpiece for this year's Union Fest, which marked the event's 40th celebration and the first in the brand new facility. Union Fest brings the university community together for a day of fun at the Union, which this year included 3,000 cupcakes, morning yoga on the rooftop garden, a midnight showing of DeadPool, face painting in the Campus Chat, Scrappy appearances, a tea party, fireworks and a '90s dance party. Students also enjoyed coffee cake -- a sweet UNT tradition. 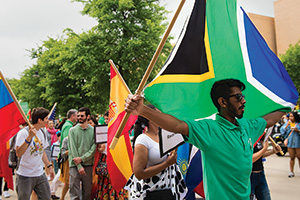 A flag parade ending at the Library Mall featured student organizations and international students celebrating UNT's diversity before the University Day ceremony. UNT President Neal Smatresk, Denton Mayor Chris Watts ('83, '92 M.Ed.) and new Mean Green football coach Seth Littrell were among the guests and gave speeches. The UNT Student Government Association also presented a time capsule to be opened on University Day 2041. The capsule, which included a flash drive with videos from Smatresk, athletic jerseys and a brick from the old Union, was installed in a wall of the new Union. 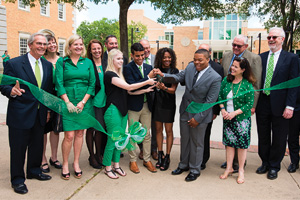 Capping off University Day festivities, Smatresk, UNT System Chancellor Lee Jackson, former UNT President V. Lane Rawlins and students gathered at the new Union for its dedication and ribbon-cutting. Located in the heart of campus, the building was designed to receive the highest level of Leadership in Energy and Environmental Design certification from the U.S. Green Building Council. The ceremony was followed by the Wingspan Festival, which offered more fun, live music and food for students.

"By shining a spotlight on the university's progress and our outstanding faculty, students and supporters for an entire week, we saw clearly just how far we've come," Smatresk says. "Together, we will define the next 125 years of excellence for UNT."

View a slideshow of the week's events below. 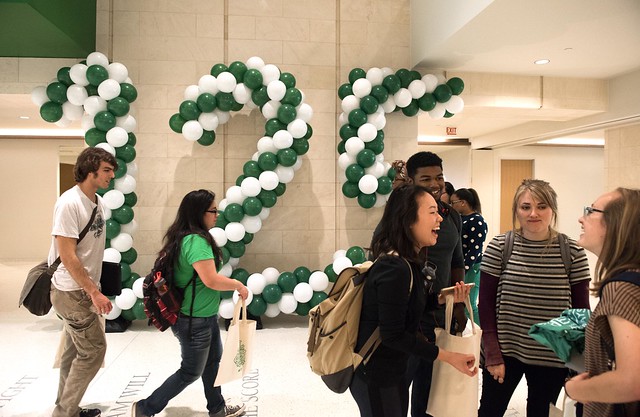 Alumni and Elvis celebrated UNT at the annual Wingspan Gala.