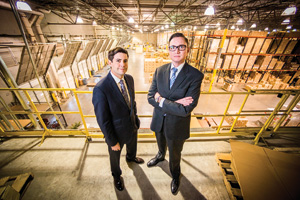 For Beau LaMothe ('07) and Dustin Eash ('06), UNT degrees helped launch a strong startup: Irving-based PGL, one of the fastest growing third-party logistics providers in the world.

"UNT was a huge influence on us and our company as a whole," says LaMothe, an entrepreneurship major, who approached Eash, a finance major, with a business proposal while the two were still in school.

"When we graduated, we knew what it would take to succeed. If we didn't have the basics down, we would not be as successful as we are today."

The pair started their business managing renovation projects in the hospitality sector.

During renovations for Rosewood Hotels & Resorts and Omni Hotels & Resorts, both in Dallas, they worked directly with sourcing and purchasing companies to save money on furniture, electronics and other equipment. They soon realized they needed a warehouse to store goods, transportation channels to move supplies to the renovation site and a system to handle the inbound freight for each project. And they secured other top clients including Verizon, AT&T, Toshiba, Mitsubishi and, more recently, the Texas Rangers Baseball Club.

"With all of the things we were doing managing projects, we had the opportunity to go into complete logistics management," says LaMothe, chief sales and marketing officer for PGL.

The company, celebrating its 10-year anniversary this summer, has expanded from eight to 195 employees in 17 offices throughout the U.S. and China, offering services in logistics, warehousing and intermodal freight transportation.

"Whenever we approach a client, we're going for a holistic approach," says LaMothe.  "From raw materials sourcing and trade shows to innovating with technology and marketing to potential clients, we're willing to invest in a long-term partnership."

LaMothe, now a member of UNT's College of Business Advisory Board, says that at UNT, he and Eash learned the importance of standing out in the marketplace, and they made customer service their differentiator.

"There is a lot of opportunity to do well in this industry, but it's tough," says Eash, who serves as the company's chief financial officer and is active with various UNT committees. "The UNT degree definitely helped us grow."

Eash was involved in the student leadership and service group, NT40, as well as the Lambda Chi Alpha fraternity and the Interfraternity Council, the Student Government Association and other campus organizations. He met LaMothe over a summer break, and the pair connected over business almost instantly. They often talked about business news and opportunities to become successful. For the friends, the conversations were natural extensions of their childhood.

As a teen, Eash helped with bookkeeping for his dad, Rick, a small-business owner, and followed the stock market. Math always came easy for him.

LaMothe grew up shadowing his dad, too. His father, Bill, is a logistics entrepreneur and longtime supporter of UNT's logistics program who was one of the first business leaders to drive interest for the program in the mid-1990s.

And both LaMothe and Eash met their wives -- Krista Browning LaMothe and Katrina Maher Eash (ʼ06) -- as UNT students.

With the company off the ground, PGL became a family affair for LaMothe. His mother, Merry "Lyn," came on board as chief executive officer. His father joined as chair of the board, a role he maintains while also serving on the board of directors for UNT's Center for Logistics Education and Research.

LaMothe enrolled at Texas Tech University on a golf scholarship but later transferred to UNT, where he developed his own relationships with UNT faculty, especially in the logistics program, which ranks sixth on Gartner Research's list of top U.S. supply chain undergraduate programs and 24th on its graduate programs list.

"Drs. Terrance Pohlen and Ted Farris were close to us and had a lot of positive resources that we could tap into," LaMothe says.

Farris recalls initially meeting the teenage LaMothe through his dad at the Byron Nelson Golf Tournament in Irving. He says the younger LaMothe, later as a student, would drop by his office to ask questions about assignments for his classes in entrepreneurship.

"The discussions we had were about the pros and cons of various answers he was considering," says Farris, a professor of logistics. "He came in wanting an exchange of ideas to see what he was missing."

LaMothe become a 2015 finalist for the Ernst & Young Entrepreneur of the Year award for the Southwest. Joining 49 "iconic entrepreneurs," he says UNT laid the groundwork.

"You need to be able to utilize resources, to understand your core competencies and to have experience with the entire life cycle of a company," says LaMothe. "UNT gave me an idea of what to expect."