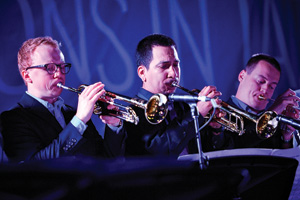 UNT's Grammy-nominated One O'Clock Lab Band had an exciting May, recording a new album and hosting music workshops and collaborations in Australia.

The band assisted in leading concerts and clinics at the James Morrison Academy of Music in Mount Gambier, South Australia, performed for jazz students from across Australia as a featured headliner at the Generations in Jazz Music Festival, and collaborated with jazz professionals and orchestras from Australia and New Zealand.

"This was an exciting adventure and a major recruiting opportunity for the College of Music," says Jay Saunders, director of the One O'Clock Lab Band.

He says the festival crowd of 6,500 hung on every note.

"None of us will ever forget the roar of the crowd after we played each selection," he says. "It was truly an incredible experience."

Band members left May 3 for Australia, where they performed, taught and took in the culture of Melbourne and Sydney. Upon returning May 17, they began preparation for a concert and a three-day recording session.

"This trip was clearly not a vacation," Saunders says. "We held rehearsals throughout our time in Australia to be prepared for the Lab 2016 recording sessions when we returned to the U.S. This was a professional development opportunity of a lifetime."

The trip also marked the 30th anniversary of the One O'Clock Lab Band's last trip to Australia in 1986. Two years ago the band was invited back for this year's events and has been preparing ever since.

"This trip was a long time coming," says Craig Marshall, the band's program manager. "We were fortunate enough to have this opportunity."

Learn more about the trip with photos and a blog at untcollegeofmusic.tumblr.com. Alumnus Rich Redmond's drumming took him from the One O'Clock Lab Band to Nashville.

Alumna Kaela Sinclair is getting heard as a singer and keyboardist for the band M83 and on her own solo records.
Top