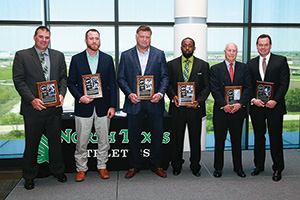 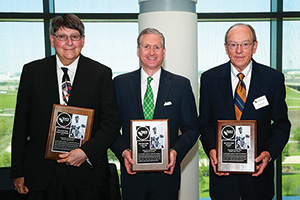 Bruzzy Westheimer ('65), G. Brint Ryan ('88) and Jim McNatt ('66), pictured from left, also were honored at the UNT Athletic Hall of Fame ceremony. The three university supporters were inducted into the Fred McCain Athletic Circle of Honor for their contributions and efforts to advance the athletics program.

Westheimer, a strong supporter of the men's and women's golf programs as well as other university initiatives, funded a new golf practice facility for the Mean Green at Maridoe Country Club in Carrollton. The contributions of Ryan, chair of the UNT System Board of Regents, have included support for basketball facility enhancements and renovations. McNatt's contributions to athletics have included an unrestricted gift being used for football facility renovations and the tennis program.

The Mean Green men's golf team received an at-large bid to the 2016 NCAA Regional for the second time in school history under head coach Brad Stracke. The Mean Green were ranked No. 62 in the nation according to Golfstat.com, which allowed them to receive one of 41 at-large bids. They finished in 10th place at the Tucson regional in May. In women's golf, former Texas State head coach Michael Akers, was named head coach at UNT this spring. Akers led the Bobcats to six NCAA Regional appearances and was recently named Sun Belt Conference Coach of the Year.

At the NCAA championships this June in Eugene, Ore., graduate student Chastity Stewart ('15) placed 22nd in both the 400- and 100-meter hurdles. She was the first from UNT since 1980 to qualify for nationals in two events, and it was her second trip. She placed 24th in the 400-meter hurdles at the 2014 finals.