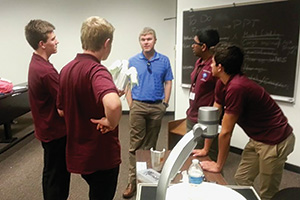 For as long as he can remember, Justin Kugler ('99 TAMS) wanted to be an astronaut. After interning with NASA and working as an analyst and commercial innovation manager for the Center for the Advancement of Science in Space, he is now a business development engineer for Made in Space Inc., helping to lead the development of in-space manufacturing technologies. And each summer, he volunteers his time to help students gain an interest in the aerospace industry.

"I know I got where I am today because of other people who volunteered their time," he says. "It's the least I can do for others."

Kugler is the director of education programs and a board member of the Foundation for International Space Education, which hosts United Space School, a two-week intensive summer program. Fifty high school students from around the world are chosen to come to the University of Houston campus at Clear Lake to participate. They work in teams to design a mission to Mars and listen to guest lecturers from the aerospace industry such as Bob Zubrin, founder of The Mars Society, and former astronauts.

"The students have time to do fun activities," Kugler says, "but the majority of the time they are working on projects to find different solutions."

Kugler, a Houston native, was in the eighth grade when he was recruited to attend UNT's Texas Academy of Mathematics and Science -- the nation's first accelerated residential program for gifted high schoolers who take research-oriented college classes while earning the equivalent of a high school diploma. He also was a Goldwater Scholar, which helped him get a job as an analyst with the Central Intelligence Agency after earning his aerospace engineering degree from Texas A&M in 2002. The prestigious scholarship provides a source of highly qualified scientists, mathematicians and engineers, and UNT leads the state in the number of winners.

"I wouldn't trade my experiences at TAMS for anything," Kugler says. "It was the first time I learned to be comfortable in my own skin. The advanced curriculum really gave me the ability to succeed on my own merit."