Alumna Kaela Sinclair is getting heard as a singer and keyboardist for the band M83 and on her own solo records. 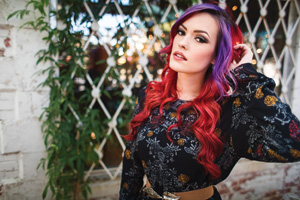 "Oh man, it's been pretty insane," says Kaela Sinclair ('12) of her busy and successful year.

The Dallas-based songwriter and keyboardist joined the French band M83 and has played on Jimmy Kimmel Live, the Coachella Music Festival and the band's world tour. She also will release her second album, Second Skin, later this year.

But thanks to skills she learned in UNT's jazz studies program -- and her triumph over stage fright -- she was prepared for this moment.

Sinclair always loved to sing and play the piano as a child, but she faced a big hurdle.

"When I was a kid, I was kind of shy," Sinclair says. "My parents would be like, 'You need to get out there. You love to sing.'"

As an adult, when Sinclair taught music lessons, she told her students the same thing she learned herself.

Sinclair honed those performances while a jazz studies major at UNT. She considered other top-notch music schools, but chose UNT's program.

Her two favorite teachers were Rosana Eckert, senior lecturer in vocal jazz, and Jennifer Barnes, director of vocal jazz studies. After graduation, she even ended up in a session singing jingles with Eckert.

In 2013, Sinclair released her first album, Sun & Mirror, which was recorded in Denton and produced by alumnus McKenzie Smith of Midlake. It also featured other UNT alumni, such as Evan Jacobs ('02), formerly of Polyphonic Spree. Sun & Mirror garnered wide praise from Paste magazine and won her fans as far away as England and Scotland, where she toured.

Joining M83 -- which specializes in electronic music that has been played on movie and TV soundtracks and commercials -- has been a different experience for Sinclair.

"Being in this band feels kind of like joining a family," she says. "We're living together on a bus every night. We're together 100 percent of the time."

The band, for which she sings and plays keyboard, has also attracted huge audiences.

"The best part is getting on stage," she say. "That's definitely the fun part."

She's also working on Second Skin. Some songs will be upbeat and danceable, while others have a more orchestral and dramatic flair. Her lyrics are often based on her life and her experiences. She steers away from the simplicity of Top 40 pop music devoted to love or broken hearts.

"I feel like human emotions are more complicated than that," she says. "I'm sad but I'm happy. Sometimes it's weird. Or the opposite -- I'm happy and everything's great, so why am I sad right now?"

"They want more depth," she says. "I think all types of people can relate to those sorts of emotions."

In fact, one teenage fan said she was going through some heavy issues and had listened to Sinclair's music over and over again while she was in the hospital.

"She felt like it helped heal her," Sinclair says. "This is why you create music."