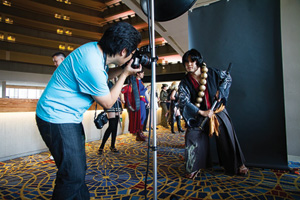 Ejen Chuang ('98) enjoyed anime as a teenager. So when he found out about an anime convention in 2008 in Los Angeles, he decided to take his camera.

"It was a photographer's dream -- colorful costumes, very easy to photograph and, in a way, it took me back to being a kid again," he says. "I was happy to see some of my favorite childhood shows still cosplayed at the convention."

Now Chuang is the author of two books, Cosplay in America and Cosplay in America v2, that feature convention goers dressed up as their favorite fantasy, science fiction and comic book characters. The recent book garnered a feature article on wired.com in March.

Chuang graduated with a major in radio, television and film, now media arts, and a minor in photography. He also drew cartoons for the North Texas Daily. After graduation, he moved to Los Angeles and has worked on ads for Hyundai, Disney and Gillette. 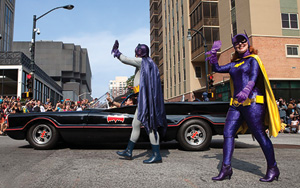 And he's done that while traveling to 10 different cities across the country each year for the cosplay conventions.

"It is very cool to have people come up to chat with you about their experiences," he says.

His first book, released in 2010, focused on the completed costumes. In 2013, he used Kickstarter to fund the companion book that dove into the process and culture of cosplay.

"My favorite images often deal with portraits of cosplayers in their homes," he says. "Mostly because it shows ordinary people in ordinary homes living extraordinary lives."

How can you take your best vacation photos?