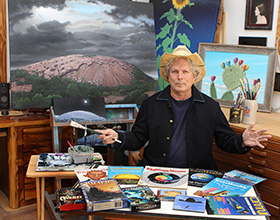 As a student, Steve Pietzsch ('73) created an illustration -- featuring three ears emerging from the bell of a horn -- that appeared on the cover of the One O'Clock Lab Band's 1973 album. Pietzsch, an advertising major, didn't know he could make a career out of drawing.

"That was my first I-like-this-illustration thing," he says, realizing, "Wow, that's what I want to do."

He has made quite a career as an illustrator, with his work appearing on the covers of Rolling Stone and Texas Monthly magazines. After several career changes, including years of working in computer animation and a stint with Disney, he's now pursuing painting on a full-time basis.

Pietzsch's first job after college was for a Dallas advertising agency before he went into illustration full time. His art has appeared in advertising campaigns for American Airlines and the covers of Avon and Bantam books. His 1988 cover for Rolling Stone featured a turntable for a story on the 100 best singles of the previous 25 years. He produced 11 covers for Texas Monthly -- including a quirky portrait of presidential candidate H. Ross Perot in 1992 and the "Planet Texas" illustration for the magazine's 20th anniversary issue.

"It was just awesome to see something like that sit on the newsstand and realize that millions of people have seen my art whether they knew my name or not," he says. "It's like you put a little mark on the planet."

But as technology changed the market for hand-drawn illustrations, he began working as a digital artist for a video game company in Austin. He's also illustrated album covers for country artists Kinky Friedman and Charlie Robison, and worked on the Disney Epic Mickey video game project. Now retired and living in the Hill Country, he can devote his time to painting his "surrealistic" landscapes.

"I can create a world and I have the power to make it look any way I want it to," he says. "I have fun with that power."