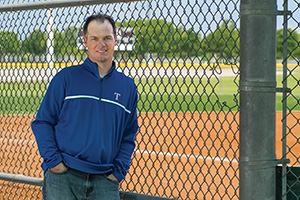 Bobby Crook ('05) loved baseball so much as a kid he skipped school to watch Texas Rangers day games and called radio talk shows to spout his opinions.

Now he works as a scout for the Texas Rangers.

"At some level, I'm doing what I dreamed at 5 or 6 years old," he says. "There's definitely those moments when I take a step back and think, 'This is pretty cool.'"

Crook, who grew up in Flower Mound, played baseball for the University of Dallas for two years. When he realized he wouldn't make it as a professional, he transferred to UNT and majored in broadcast journalism with the hopes of being a sportscaster. He anchored a daily news show for KNTU and was part of a sports talk show called The Green Guys with four other student reporters. He was especially appreciative of John Mark Dempsey, a former assistant professor of journalism, and Eric Gormley, broadcast journalism professor.

He also landed an internship with the sports radio station The Ticket -- where he worked with alumni George Dunham ('88) and Craig Miller ('88).

"I actually used to call into their show when I was really young and the Ticket was getting off the ground, so that was my foot in the door there," he says. "They were both very good to me, when I was younger and when I interned there, and they helped set the stage for my being able to work in baseball."

A producer at The Ticket tipped him off that the Rangers' public relations office was seeking interns.

Crook got that internship, which turned into a full-time job after college. Two years later, he was working for their operations department, leading to a series of positions and, eventually, his current job as a scout.

His duties include evaluating college and amateur baseball players in Texas, Oklahoma and Arkansas.

Crook has to determine if a 17-year-old player can have a future in baseball five to 10 years in the future.

The job requires lots of driving and watching games.

"I do carry a radar gun, even though it's had very little success in breaking the ice with police officers to get out of speeding tickets," he says.

But he did clock Neftali Feliz -- who has pitched in the major leagues for the Rangers and is now pitching for its Triple-A team in Round Rock -- in at the highest velocity of 101 miles per hour when he was on the Rangers' Double-A team in Frisco in 2008.

Crooks says acquiring players is a group deal, but he is proudest of playing a part in the scouting and signing of Nick Martinez, a right-handed pitcher from Fordham University, who was drafted in 2011 and is pitching for the team. The first player he personally signed was Jonathan Edwards, who is pitching for the Double-A team in Frisco right now.

He says his biggest accomplishment has been being part of the front office when the Rangers won the American League championship in 2010 and 2011. The Rangers lost both World Series, including a heartbreaking game in which they were a strike away from winning against the St. Louis Cardinals.

"On some level, something reminds me of that every day," Crook says. But, "we're back at it at 8 in the morning because we're chasing that ring."

Editor's note: The Texas Rangers will host UNT Night July 9 by discounting ticket prices for fans and giving out a Rangers cap with Mean Green colors. The first 1,000 fans who buy tickets through the Texas Rangers' website will receive a voucher for the cap that they can redeem that night at the promotions kiosk at Globe Life Park.

Mark Schectman returned to campus as a fill-in host for a show he helped start as a student.
Top