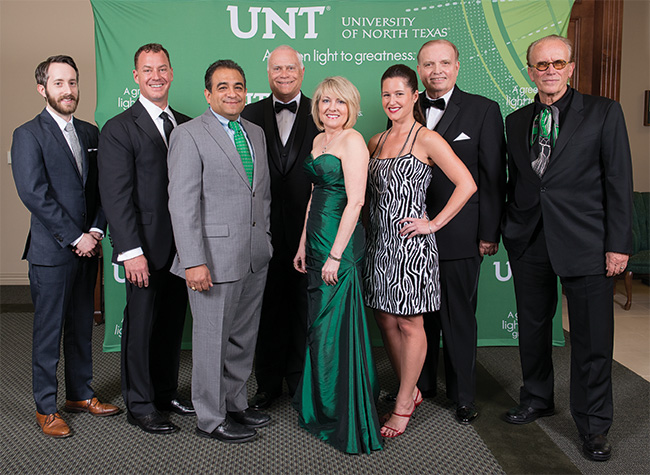 Alumni were honored at this year's UNT Alumni Awards for their entrepreneurship, philanthropy, spirit and service to their communities.

The awards bestowed at the April 11 event included two Distinguished Alumni Awards, the university's most prestigious honor has been presented since 1965 to individuals who have earned prominence and accolades for their professional accomplishments. The Distinguished Young Alumni Award honors alumni under 40 for distinguished achievement.

"When you look at the caliber of our alumni award winners and the breadth of their accomplishments, you see that success comes in all forms. But one thing they have in common is a UNT education," President Neal Smatresk says. "We take great pride in knowing that they are achieving such great success and having an impact."

Terry Brewer, who earned his degrees in chemistry, is president of Brewer Science, the international company he founded in Rolla, Mo., in 1981 to commercialize his invention of anti-refl ective coatings. Brewer Science creates, develops and manufactures specialty materials, equipment and process solutions for applications in areas such as semiconductors, advanced packaging, sensors, displays and printed electronics.

"When you go from being a student to being a UNT alumnus," Brewer says,"you're not only given a diploma, you're given a key, and your job then is to take that key and hand it off to somebody else."

Ernie Kuehne Jr., attorney and president and board chair of Kuehne Oil Co., came to UNT on a track scholarship. After earning his bachelor's degree in political science, he earned a Doctor of Jurisprudence from Baylor University. Kuehne is a 2013 UNT Athletic Hall of Fame inductee as the winner of the Fred McCain Award for Outstanding Service, and a recipient of the Ulys Knight Spirit Award. He established the UNT Kuehne Speaker Series on National Security and helped raise more than $3 million for a basketball training facility, scoreboard and scholarships.

"I'm very emotional about my love for UNT," he says. "It shaped me as a person and prepared me for the future."

Peter Francis Weller is best known for his starring roles in Robocop, Woody Allen's Mighty Aphrodite and 2013's Star Trek Into Darkness. He received an Academy Award nomination for his direction of the 1993 short Partners, in which he also acted. A published art historian, Weller holds a bachelor's degree in theatre from UNT and a master's in Italian Renaissance art history from Syracuse University. He is a Ph.D. candidate in Italian Renaissance and ancient Roman art history at UCLA.

"It was remarkable to be going to school at UNT in the '60s when there were huge dilemmas of gender, of race, of war, of money," he says. "The dialogue alone was stupendous."

Graham Douglas, a freelance advertising creative director, has worked oncampaigns for many well-known brands. His work has earned the Cannes GrandPrix for Good and the D&AD White Pencil, both prestigious advertising awards. As creative director for New York City-based Droga5, Douglas was named one of Forbes' "30 Under 30" in marketing and advertising. He also was named one of the "World's 50 Most Creative People" by Creativity magazine. The UNT advertising alum became a supporter of bone marrow registry after his twin brother, Dallas attorney Britton Douglas ('06), received a life-saving bone marrow transplant.

Gabriella Draney is the co-founder and CEO of Tech Wildcatters, named one of Forbes' Top 10 seed accelerators for its work connecting technology startups to resources. In January, she was named one of Fast Company's 1,000 most creative business people in the country. Draney previously worked in the venture capital industry and as a financial advisor. After graduating with a degree in finance from UNT, she earned her M.B.A. from SMU.

"UNT has such diversity," she says."The more that students get out and meet their fellow students and get to know who they are as people and not as stereotypes, the better everybody is."

Presented to honor individuals who have provided exceptional volunteer service to UNT.

Presented to an individual or group that has made noteworthy efforts to sustain spirit among the UNT family.

Presented to a family for extraordinary service to and advocacy for UNT through multiple generations.

Learn more about this year's winners and nominate alumni for the 2015 awards by Aug. 1. >>

Recipients honored for professional experience and service to UNT.

UNT honors the spirit of philanthropy, entrepreneurship and service.