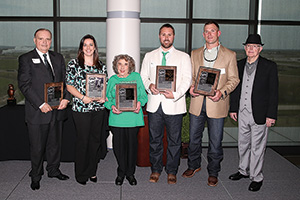 This spring brought recognition for Mean Green success on the field and in the classroom. In April, the Mean Green celebrated the induction of new members into the UNT Athletic Hall of Fame during a banquet at Apogee Stadium before the Green and White spring football game. Accepting Hall of Fame honors were, from left, Ernie Kuehne ('66), recipient of the Fred McCain Award, which is presented to individuals whose contributions and efforts advance the athletics program; Heather Hutyra ('08), soccer; and from football, Helen Cooper for her husband, Jim Cooper ('48), Scott Hall ('05), Cody Spencer ('11) and former head coach Clark "Corky" Nelson.

Mean Green athletes also shine academically. This spring, UNT placed 154 student-athletes on Conference USA's annual academic honor roll, for having earned a cumulative 3.0 GPA or higher. Thirty-seven Mean Green student-athletes earned a GPA of 3.75 or better and received the Commissioner's Academic Medal. Football led with 32 student-athletes on the honor roll, including five medalists, and had the highest cumulative GPA in the conference. Swimming and diving followed with 28 honorees, including 13 medal winners, and women's track and field followed with 17 honorees.

This fall, getting to Apogee Stadium for Mean Green home game days will be easier. UNT Athletics is teaming up with the Denton Convention and Visitors Bureau and Denton County Transportation Authority A-train for complimentary transportation from various parking options in Denton. Don't miss UNT's home opener against SMU Sept. 6 and there also are plenty of opportunities to support the Mean Green away from home this fall, including games at Texas Aug. 30, Rice Oct. 25, UTEP Nov. 15 and UTSA Nov. 29. See the entire Mean Green football schedule and find out how to purchase season tickets.