Dance and theatre alumni succeed, from Hollywood to Broadway.

There's a competitive edge to the actors and dancers who move to Los Angeles and New York City to "make it in the business."

After all, they're auditioning with thousands of other hopefuls looking for recognition of their talent.

"People aren't lining up to give you a pat on the back for your efforts," says theatre graduate Paisley Baker ('00) of her experiences in Los Angeles as an actress, producer, casting director and talent manager. "I didn't go into an environment of assurances. If you're whining or complaining, the people working with you won't have time for that. You can graduate with a theatre degree and not go anywhere, but at UNT, I learned to work hard and go after what I want."

Baker had previously only taken the stage in high school with choir. In her junior year at UNT, she auditioned for a play directed by associate professor Marjorie Hayes, managing director of theatre production. She was nervous -- reviewing her lines up until the minute she walked on stage -- but, Hayes' guidance after she got the part helped Baker realize that she could make it as an actress. That performance garnered her an Irene Ryan scholarship nomination.

Baker, like other UNT dance and theatre students, received the extra support and personal interest as well as leadership and performance opportunities to make her dreams of working after graduation in a major competitive market a reality. Equipped with a comprehensive training strong in the liberal arts and backed with real-world experiences, UNT alumni are leaders in the business of the arts as dancers, performers, directors, producers, agents and actors.

For Baker, these opportunities included joining the University Players student theatre organization and helping start a summer acting group, Nomad Theatre, with fellow students. She became president of the College of Arts and Sciences Ambassadors and joined NT40, a student leadership organization on campus.

"Through the theatre department," Baker says, "I learned to assert myself in leadership roles."

After graduation, Baker moved to L.A. where she was welcomed by fellow theatre alumni like Roderick Bentley ('98) who showed her the city. Another alumna, Allison Reese ('97), known professionally as Reese Van Allen, asked Baker to be a production assistant on her short film.

"I said, 'OK, is there a book I can read to tell me what to do?' and she laughed and said, 'You're going to sweep the floor and make us coffee,'" Baker recalls.

Making coffee turned into a networking opportunity when Baker found out about a job with The Jersey, a Disney television series. She worked behind the scenes for the show but eventually did some voiceover work and was able to get her Screen Actors Guild card as well.

"Being in this business -- as an actor, producer, casting director -- takes nerve and endless hard work," Baker says. "I learned that when sending out inquiries, I couldn't make it all about me, me, me. You have to remember you're always working for someone else."

Keeping her focus on what others wanted, Baker soon started to see a pattern in the early 2000s away from scripted shows and toward reality TV. She eventually became executive in charge of a casting agency, gathering talent for shows such as Millionaire Matchmaker, Trading Spaces, Tool Academy, Jersey Shore and more.

Along the way, Baker also tried her hand at writing and registered a feature script with the Writers Guild of America. When fellow UNT alumnus Scott Vinci ('95) wanted to shop around a short comic series featuring Lorenzo Lamas, he worked with Baker because she had experience with pitch meetings.

"That's kind of how I started managing creative talent," says Baker, who now owns her own talent management, development and production company, Coat Check Creative. "I'm using my connections to help make connections for others." 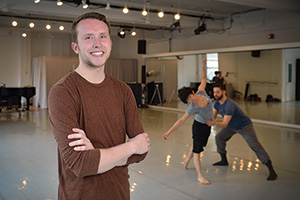 Networking and hard work are two tools that Jake Bone ('12) knows how to use. The summer after graduating from UNT with a Bachelor of Fine Arts in dance, he moved to New York and completed a summer workshop with Doug Varone and Dancers, an internationally renowned dance company. Afterward, Varone encouraged Bone to try for an understudy part in the Metropolitan Opera's production of Les Troyens. Bone got the part and, as understudy for three dancers, had to learn three parts. The training paid off when one of the dancers couldn't make it to a show in time and Bone was able to dance at the Met.

"I'm so thankful for all the opportunities I've been given," he says.

That includes balancing his schedule as a full-time member of two dance companies -- Bare and Gibney Dance -- as well as working on projects with the Median Movement and teaching workshops to students, which he did at UNT in 2013.

"I still use everything I learned at UNT about the body, movement and the relationship between them," Bone says. "The professors cultivated my talents."

Eventually, Bone says, he might want to teach in a collegiate setting because he loves the rewarding feeling of seeing students learn. But for now his goals include dancing full-time and taking his talents worldwide.

"I need to continue to go for it," he says, "because I'm young, this is the right time and it's very rewarding." 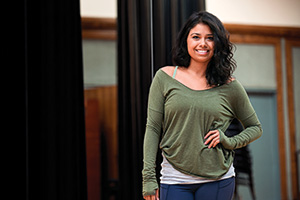 Isis Avalos ('12) understands that feeling of being rewarded for hard work.

For her senior dance, she choreographed a piece about people coming together to fight for what they believe is right. It was based on her thoughts on gay rights, women's rights and immigration. When she had the opportunity in 2013 to audition with a dance company in L.A. that is not only a nonprofit, but committed to social activism, Avalos felt like she'd found the perfect match.

She joined the company CONTRA-TIEMPO Urban Latin Dance Theatre at an exciting time. The group has been chosen as an ambassador with DanceMotion USA, a program of the U.S. Department of State's Bureau of Educational and Cultural Affairs. The company spent part of May and June touring South America as ambassadors of dance for the U.S.

"Joining the company when they are involved in such high-profile activities is an honor for me," Avalos says. "When I auditioned, they said they picked me because they look for dancers who are not just performers but artists who want to be engaged in the community."

The training that brought Avalos this far wasn't always easy. Learning ballet as a child, she took up hip-hop dance in middle school and started her school's first dance team. When accepted to UNT, she says she was amazed by the modern dance movements of her professors and fellow students.

"I remember crying that first semester because the way they moved seemed so foreign to me,'" Avalos says. "But, my dance professors Mary Lynn Babcock, Shelley Cushman, Robin Lakes and Kihyoung Choi really cared about me and took the time to teach me. The irony is that modern is the style I gravitate to. One would never know I spent years dancing mainly hip-hop. I am the outcome of good mentors and professors." 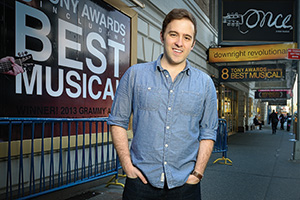 It was a professor and a fellow student who mentored actor Scott Montgomery ('10) and advised him to pursue his dreams.

Montgomery remembers Timothy Wilson, professor of theatre, telling him not to go to New York City with blinders on, as many actor hopefuls do, but to go while he was still young. Fellow student Wes Bourland, who first directed Montgomery in a community production of Godspell, happened to live in New York when Montgomery was ready to move and helped him navigate the acting scene there.

One tip Montgomery learned early was to join the Actors' Equity Association. A typical day of auditions includes getting out the door by 5 a.m. to stand in an audition line at 7 a.m., but as a union member, he can make an appointment for later in the day so that he's more relaxed and ready.

So far, Montgomery has found work both in New York and regionally. He was in an off-Broadway production of Pajama Game in November 2013 and toured regionally in Ohio with national theatre group TheaterWorks USA.

He credits his education at UNT with giving him flexibility in all aspects of theatre.

"We got a well-rounded experience doing everything -- working on costumes and backstage and on the deck crew and helping the stage manager during dance productions," Montgomery says. "It taught me how to be a professional and respect everyone involved in a production."

During its Wingspan Gala, the university honored alumni, faculty, students and friends.

Carmen Cusack, a former student in the College of Music, earns a Tony nomination.
Top