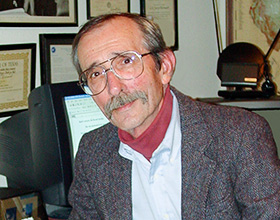 Clint Richmond learned many things from journalism professor C.E. "Pop" Shuford, but one lesson stuck in his mind.

"The quickest way to fail for Shuford was to let any type of opinion leak into the story assignment," says Richmond, who attended UNT in the late 1950s under the name Gerald Richmond.

His love for facts led Richmond to a career as a reporter for The Dallas Times Herald, where he covered the assassination of President Kennedy, and, later, as a freelancer, writing for such magazines such as People, Time and Newsweek. He's also published 10 nonfiction books, including Selena!, the best-selling biography of the legendary Tejana singer, and, most recently, Fetch the Devil (ForeEdge/University Press of New England), about an unsolved 1938 murder of a mother and daughter in El Paso that he learned about from a Dallas sheriff.

Richmond stayed on the story for decades, even when law enforcement denied him access to the files. He doesn't solve the murder, but he finds a plausible solution.

"As a journalist, you get onto something until you satisfy yourself," he says.