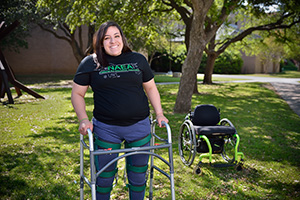 Nothing will stop senior Emily Rose Hernandez from walking across the stage when she graduates from UNT in May, not even being paralyzed from the waist down.

During her commute to UNT in August 2009, one of the wheels on Hernandez's truck came off, causing her to drive off an overpass. She broke her neck, shoulder, wrist and ribs, and her lungs collapsed twice. Her brain hemorrhaged and her spinal cord was injured, leaving her legs paralyzed.

"After my wreck I was determined to get my life back on track ASAP," says Hernandez. "I re-enrolled at the College of Visual Arts and Design at UNT the following August."

Hernandez will graduate at 1 p.m. May 10 (Saturday) with two degrees -- one in visual arts studies and the other in studio art.

Hernandez decided, not only that she wanted to earn her degrees and graduate, but that she wanted to be able to walk across the stage during the ceremony. After several years of rehabilitation, she will be ready to see that dream come true -- but it will take the aid of costly braces.

The braces Hernandez needs will allow her legs to support her again and, ultimately, to walk.

"I have been putting my entire heart and mind into earning both of my degrees within a four-year time period and achieving what I've been working so hard for since my wreck: walking across that stage," Hernandez says. "Walking across the stage will be a gift to myself for my hard work."

When she found out the braces would cost thousands of dollars, she realized she would need help. Hernandez began fundraising through a crowdfunding website and has raised more than $3,500.

"I knew I would need a lot of time and help to work on getting and being able to use the braces before I would be able to walk the stage," Hernandez says. "I did my best to find the resources I needed to achieve my goal."

When Pi Kappa Phi fraternity president Taylor Lindholm heard about Hernandez's goal, he knew this could be a great opportunity for the fraternity to reach out to a fellow student.

"Originally Emily went to the Office of Disability Accommodation for help and they referred her to our advisor, Jaime Blanton, who then reached out to the brothers with Emily's story," Lindholm says. "We immediately wanted to get involved."

Pi Kappa Phi is the only fraternal organization in the nation that manages its own nonprofit organization. Thanks in part to the UNT chapter's philanthropic efforts and community service, the chapter has been recognized by UNT's Office of Greek Life as Chapter of the Year for the past two years.

"Helping others is a core value of our organization," Blanton says. "We focus our efforts on helping people with disabilities to ensure that they are recognized for their abilities. In this case, what we are doing is helping the community recognize that Emily's dream of walking across the stage at graduation is about having an equal college experience. It's about making her dream a reality."

The Pi Kappa Phi fraternity has held several fundraisers around campus including a bike-a-thon and an Empathy Dinner for Emily's cause. For the bike-a-thon, members of the fraternity rode stationary bikes on campus for 72 hours to raise awareness of Hernandez's disability.

"Emily came by each day of the bike-a-thon," Lindholm says. "She has the most upbeat personality and is the most engaging person I have ever met. It was truly life-changing to see her open up her heart to all the people who walked by during the bike-a-thon."

Despite the fraternity's hard work, Hernandez was concerned.

Her right ankle could not make the necessary 90-degree angle needed to wear braces. It was a few degrees shy, and the doctors doubted whether her body would be physically ready in time for commencement.

It seemed Hernandez's hope of walking the stage was slipping away.

In the midst of Pi Kappa Phi's fundraisers, Hernandez got a surprise message from her friend Leidy Guarin, who was Hernandez's residence hall advisor when she lived at UNT's College Inn.

Unbeknownst to anyone, Guarin had started working behind the scenes as soon as she heard money was being raised for braces. She emailed as many companies as she could think of in hopes of a monetary donation or a discount on the needed braces.

Employees at Hanger Clinic emailed back that they would be happy to set an appointment with her at their Lewisville location. The company was founded in 1861 by the first amputee of the Civil War. It now operates more than 740 clinic locations throughout the U.S. and offers advanced prosthetics and orthotics for those with limb loss, paralysis or other debilitating conditions.

"Hanger gave her hope," says Guarin, who has kept in contact with Hernandez since she moved off the UNT campus. "That's something her doctors and many of the people around her couldn't give because they doubted whether it would be feasible."

When clinician Edwin Hassler met with Hernandez in March, he knew it would be difficult to get her fitted and walking in custom-designed braces in such a short timeframe. Only a couple of months remained before UNT's commencement ceremonies. However, he knew it could be done.

"I have in my career helped another patient walk across the stage for graduation after they had been told it could not be done," says Hassler, who also noted how rewarding it was to overcome the challenge and see patients achieve their goals.

Hernandez expected to be turned away during her first meeting with Hassler. What she got instead was news she would be fitted for a set of leg braces, and they would be covered by her insurance. The cost for the devices can vary since each one is custom designed for each individual; however, her pair cost more than $6,500. And Hassler further surprised her with braces accented in UNT's signature green color.

In mid-April, Hernandez received the bilateral hip-knee-ankle-foot-orthoses. These braces are designed to help her relearn the skills needed for standing, posture, and movement since Hernandez has not walked in nearly five years.

Despite all the obstacles she had to overcome, Hernandez will walk at graduation by using her torso to displace her weight and propel her forward. However, her journey is far from complete.

After graduation, the braces will likely be modified into a reciprocating gait orthosis (RGO) that she can use to walk more normally, one leg at a time. This transition will occur once she masters walking with her current braces.

Additionally, the aspiring art teacher is hoping for a specially-adapted vehicle so she can drive to work.

In all, UNT's Pi Kappa Phi members raised more than $3,000 in their efforts to support Hernandez and students like her. They hope to assist with any needed expenses for the RGO, the car or the vehicle adaptations.

The ultimate goal, says Lindholm, is to help Hernandez achieve her dreams.

"Walking across the stage isn't just about me anymore," Hernandez says. "It's about all of the people who have supported me on my journey."

And for that moment, Hernandez plans to have her two UNT helpers -- Lindholm and Guarin -- by her side, walking across the graduation stage with her.