Get to know
Cara Santa Maria 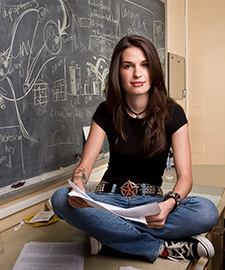 Black holes and dark matter are intriguing space-time phenomena, but what are they exactly? Cara Santa Maria ('04, '07 M.S.) explains the technical jargon and complex concepts involved in the latest scientific discoveries in astrophysics and other fields, from evolutionary biology to animal cognition. The Los Angeles-based science communicator has been delighting audiences worldwide with her gift of science gab since 2011 when she landed her first big gig as senior science correspondent and talk show host for The Huffington Post.

Whether she is interviewing theoretical physicists about parallel universes or Nobel Laureates about virus treatments, Santa Maria is as comfortable navigating the nuances of science as she is interacting with the scientists themselves.

Now Santa Maria hosts her own podcast, Talk Nerdy, and is a commentator on, SoCal Connected, a news show on KCET, and TechKnow on Al Jazeera America. She has also appeared on CNN, the Travel Channel, Larry King Live, The Young Turks, Attack of the Show and BBC.

Equipped with a bachelor's degree in psychology and a master's degree in neurobiology, Santa Maria attributes her ability to explain science to her UNT training, which taught rigorous, evidence-based methods, and a love of conversation.

"Whether I'm at a dinner party with friends or in a public discussion," she says, "my natural instinct is to talk about cool science stuff in an accessible way."

"She could always be counted on to ask a question that began two jumps ahead of the rest of the class," Jenkins says.

Santa Maria says she owes a lot to Jenkins.

"Dr. Jenkins was supportive, but also tough. She helped me do the work and pushed me to my fullest potential," she says.

As a graduate student, Santa Maria worked with Guenter Gross, professor of biology, as a cell-culture technician and lab manager in UNT's Center for Network Neuroscience. She assisted with his research and had the freedom to plan her own experiments. And she says Kim Piccolo, her freshman biology lab coordinator, was instrumental in honing her skills as a science educator.

"Kim not only taught me how to teach but to embrace it as a talent," she says.

As a graduate teaching assistant under Piccolo's direction, Santa Maria taught freshman biology, as well as labs and lectures for advanced classes, including those taken by students in UNT's Texas Academy of Mathematics and Science. The academy was the nation's first residential program for gifted high schoolers who take research-oriented college classes while earning a diploma.

Having graduated from high school at 16 and from college at 20, Santa Maria could relate to their unique challenges.

"I knew what it was like living on a college campus and yet wanting to go to your senior prom," she says.

Santa Maria says as a talk show host she's now teaching to wider audiences -- she has 54,000 Twitter followers and nearly 32,000 Facebook fans. Even with great exposure and feedback, Santa Maria acknowledges that science is still not mainstream. But together with other young science communicators, she hopes to increase science literacy.

"I just want to go where the people are."